NHS needs ventilators more than anything else for coronavirus – Matt Hancock 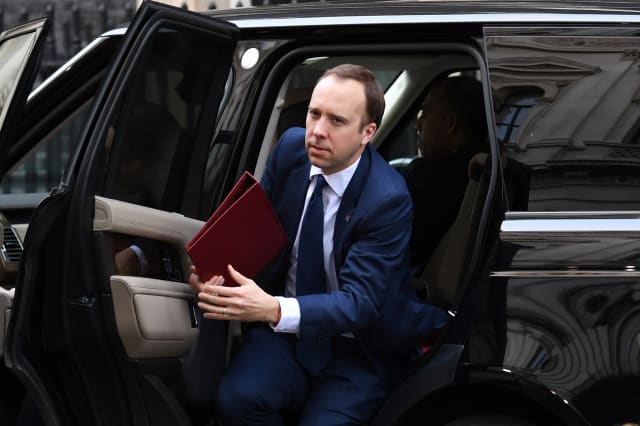 The NHS needs ventilators now more than anything else, as it takes on the coronavirus outbreak, the Heath Secretary said.

Engineers have already been asked to draw up plans to quickly produce more ventilators in the UK, amid concerns that critical care facilities will come under intense pressure as the Covid-19 crisis intensifies.

Prime Minister Boris Johnson will personally urge manufacturers to shift their production lines to build ventilators, as the NHS prepares for a significant increase in cases of Covid-19.

On Monday Mr Johnson will urge manufacturers to join a “national effort” to produce equipment for the NHS.

Health Secretary Matt Hancock told Sophy Ridge On Sunday on Sky News: “We start with around 5,000 ventilators, we think we need many times more than that, and we are saying if you produce a ventilator then we will buy it.

“No number is too high.”

He added: “They are relatively complicated pieces of kit, I couldn’t make one, but they’re not so complicated that the advanced manufacturing that this country is so good at now can’t be able to turn its production lines over to.

“We’ve been talking to a whole host of companies about it and the Prime Minister is hosting a conference call today with them to say very clearly to the nation’s manufacturers, ventilators are the thing that we are going to need, and frankly, right across the world, the demand for them is incredibly high, so it is not possible to produce too many.

“So anybody who can should turn production and their engineering minds over to the production of ventilators.”

He added: “The thing the NHS needs now more than anything else is more ventilators.

“We’ve been buying as many as we can but we need to produce more too.”

The chairman of the British Medical Association, Dr Chaand Nagpaul, was asked about the number of ventilators in the UK, and told Sophy Ridge: “Our starting position unfortunately has been far worse than many other of our European nations – we have about a quarter of the critical care beds that Germany has, as an example, so it’s really critical, it’s really important that we now see transparently what plans the Government has to expand that capacity.”

Asked if he is more worried now than two weeks ago, he said: “Of course I’m worried, I mean I said two weeks ago that this situation could change on a daily basis and in fact that is exactly what has happened.”

Dr Nagpaul said the UK’s lack of ventilators when compared to other countries is “a result of a decade of under-funding”.

He added: “And now what, therefore, we need to do, is make some really decisive decisions on how that limited resource is used in the best possible way for those who are going to need it.

“And that may require, and it should require actually, some major decisions on ceasing non-urgent routine care, a mass move towards many more consultations occurring remotely.”

He added: “We need to have clear plans how patients can be remotely managed and how the technology can support that.”