Government urged to back action plan to protect aviation industry 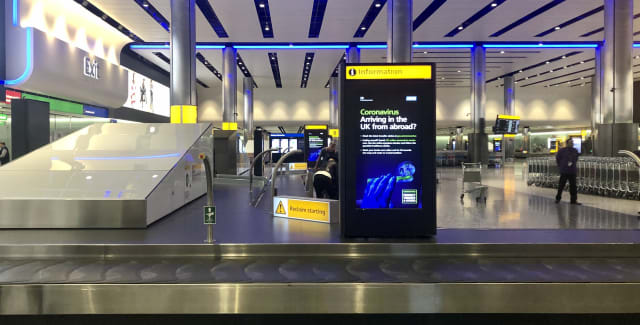 Union leaders have drawn up plans to save aviation jobs amid warnings that the industry faces an “unprecedented crisis” because of the coronavirus outbreak.

Unite said that without the Government’s help, thousands of jobs were under threat.

Alongside other aviation unions across Europe, a four-point plan has been drawn up which Unite believes the Government must adopt to ensure the industry survives.

The four points are:

– The government to make contributions to cover workers’ pay to ensure that the UK’s aviation infrastructure remains intact, and the consideration of taking a financial stake in airlines and airports to help ensure their survival;

– The extension of loans to airlines and airports and other aviation companies to enable them to ease the pressure of the immediate pay-back of loans and to assist in the retention of staff and the preservation of routes;

– A delay in the payment of taxes and duties that airlines are obliged to pay including a temporary suspension or reduction in Air Passenger Duty (APD);

– Government to support routes through subsidies under public service obligation rules, which are tied to long-term environmental commitments as part of an integrated sustainable transport network.

Unite is engaged in negotiations throughout the aviation industry over workers taking voluntary unpaid leave, temporary lay-offs of staff and redundancies as the sector tries to contend with a huge and unprecedented drop in flights and passenger numbers, with many routes currently not being flown at all.

Other European countries including France, Germany, Italy and the Netherlands are already working on measures to support their aviation industries, Unite said.

Assistant general secretary Diana Holland said: “The Government must act decisively and act now, so that when the coronavirus crisis ends there will still be a UK aviation industry.

“Up and down the UK, Unite is working with airlines, airports and the supply chain, to preserve jobs and companies for the future and it is essential that the government plays its part.

“The challenges faced by the UK aviation industry at this moment are entirely unprecedented and all solutions to support the sector must be fully considered.

“The aviation industry employs hundreds of thousands of workers and they are all looking at the Government for immediate help, to ensure they will still have jobs in the future.”