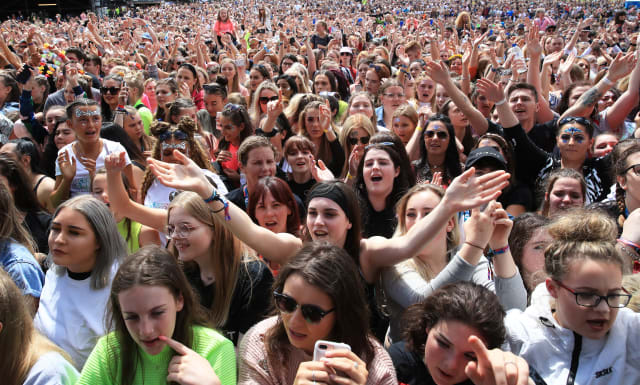 Radio 1’s Big Weekend has been called off by organisers as the music industry continues to feel the impact of the Covid-19 pandemic.

The music festival, which had Biffy Clyro, Harry Styles and Camila Cabello on the line-up, was due to take place in Dundee from Friday May 22 to Sunday May 24.

More than 70,000 music fans were expected to attend over the course of the event in Camperdown Park.

A statement released by BBC Radio 1 said: “After careful consideration we have come to the decision that Radio 1’s Big Weekend 2020 in Dundee will not go ahead.

“This decision has been made in conjunction with our event partners, in line with the advice from the Scottish Government, and while we know fans looking forward to purchasing tickets will be disappointed, it is important that we prioritise the health and safety of all those involved.”

While Big Weekend will not be taking place this year, it is understood that organisers are speaking to Dundee council for a future event.

The scrapping of the annual Radio 1 festival comes as the entertainment industry continues to deal with the fallout caused by the spread of coronavirus.

UK Music’s acting chief executive Tom Kiehl called on the Government to take “urgent steps to safeguard a music industry which is the envy of the world”, hours after Record Store Day was postponed.

The annual global music event, which involves thousands of people and small businesses, was due to take place on April 18 but has been delayed because of coronavirus concerns.

Record Store Day said in a statement the decision “comes at a time of unprecedented uncertainty and the health and safety of the general public must come first”.

Organisers said: “This was absolutely not an easy decision to make as hundreds of independent shops and labels have been working hard towards this year’s celebrations.

“We’re working with all of our partners and our stores to make this change as smooth as possible for everyone: customers, record stores, artists, labels and more.

“Record Store Day is everywhere and we want to hold our party when everyone can gather around safely to celebrate life, art, music and the culture of the indie record store.”

Elsewhere in music, teenage pop sensation Billie Eilish has been forced to postpone a string of US tour dates as health officials around the world warn against mass gatherings of people.

Eilish, one of music’s hottest stars, said: “I’m so sad to do this but we need to postpone these dates to keep everyone safe.

“We’ll let you know when they can be rescheduled. Please keep yourselves healthy. I love you.”

Other musicians including The Who and Pearl Jam have postponed their tours.

Organisers said they were “working hard” to ensure the event goes ahead in June.

In Hollywood, Disney’s blockbuster remake of Mulan is the latest major release to be postponed.

Mulan had been expected to be one of the entertainment giant’s leading films of 2020 and was supposed to arrive in UK cinemas on March 27.

Disney has now delayed its release until an unspecified date later in the year, along with horror films The New Mutants and Antlers.

The news came hours after A Quiet Place II and Fast and Furious 9 were both postponed.

Another of 2020’s biggest films, James Bond movie No Time To Die, has already been pushed back to November, having originally been set to arrive in April.

In better news for film fans, beloved Hollywood star Tom Hanks has reassured fans he and wife Rita Wilson are doing well after they were both diagnosed with Covid-19 while in Australia for an Elvis Presley biopic he is starring in.

Television in the US has also been thrown into disarray by the crisis.

In another disturbance to everyday life in the US, the late-night talk shows, a television staple in the US, have also halted filming, with The Tonight Show Starring Jimmy Fallon, Late Night With Seth Meyers and The Late Show With Stephen Colbert all ceasing production.

The shows had already been filming without a studio audience.

All three are planning to return to a normal taping schedule on March 30, their respective networks said.

Production on the second series of neo-noir fantasy Carnival Row, starring Orlando Bloom and Cara Delevingne, has been suspended. Bloom said he was going home to the US, where his fiance Katy Perry is expecting their first child.

The Disney cruise line will suspend new departures from March 14.

Sadiq Khan has announced the cancellation of the Mayor of London’s St Patrick’s Day festival in the capital, which was due to take place on Sunday.

He said key performers and parade participants are “no longer able to participate due to the ongoing threat of coronavirus”.

Looking ahead, major events shrouded in doubt include the Met Gala and Cannes film festival, both in May, the Eurovision Song Contest in Rotterdam, also in May and San Diego Comic-Con in July.

The festivals, run by the same organiser, were supposed to take place in the California desert in April but have been pushed back to October.

Widely known as E3, the annual event draws the biggest names in video games to Los Angeles each year. It was due to take place in June but it has been cancelled.

The ceremony was due to take place at the Forum in Inglewood, California, but Nickelodeon has postponed the event in “consideration of the safety and well-being of every person involved with the show, which is our top priority”.

The LGBTQ awards show was set to take place in New York next week but was cancelled on Wednesday, and the organisation said it would provide an update “in coming weeks” on the Los Angeles awards show, set for April..

The National Association of Theatre Owners announced the decision to cancel this year’s event, scheduled to take place in Las Vegas from March 30 to April 2, shortly after Donald Trump unveiled the suspension on travel between the US and continental Europe.

The major TV festival in Los Angeles was due to host shows including HBO comedy Curb Your Enthusiasm, time-travelling drama Outlander and Star Trek: Picard later this month, but organisers made the decision to postpone it.

The revered actress, 84, had been set to receive a lifetime achievement award from the American Film Institute on April 25, but the event has been postponed with a new date to be announced.

The literary event was due to take place at Olympia London from March 10 to 12 before organisers pulled the plug.

The Royal Television Society (RTS) Programme Awards, due to take place on March 17, will be held behind closed doors.

The multi-venue event, one of Europe’s largest country music festivals, was postponed less than 24 hours before it was due to begin this weekend across venues in England, Scotland and Ireland.

The 19th edition of the annual New York event was postponed, although organisers did not confirm an alternative date.

The London rock band cancelled their UK tour, which was due to begin in Norwich on Friday night, after a member began “showing symptoms of Covid-19”.