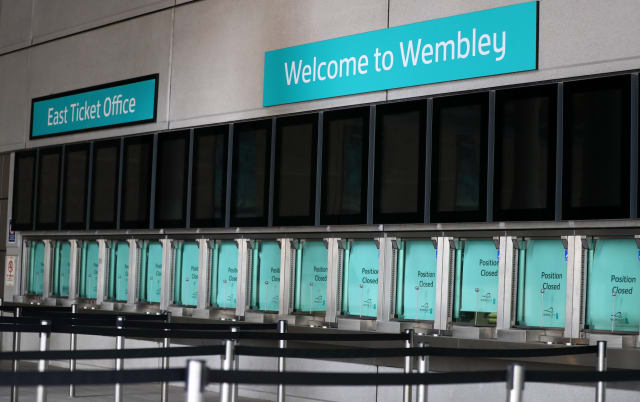 Plans are under way to ban mass gatherings from next week as the Government looks to implement more extreme measures in the fight against Covid-19.

Boris Johnson had faced criticism for not introducing such measures, despite similar steps being taken by other European countries as the pandemic worsens.

Emergency legislation bringing in beefed-up powers will be published next week and there could also be a move towards more people working from home, a Whitehall source said.

The announcement comes as the UK deals with a rising number of cases of the virus, increasing to 798, and a death toll of 11.

Earlier on Friday the World Health Organisation said Europe has now become the epicentre of the pandemic and Donald Trump indicated he might add the UK to a list of countries facing a US travel ban.

On another day of dramatic developments in the spread of Covid-19:

– New restrictions are being imposed on visitor access to the Palace of Westminster and overseas travel by MPs and peers is being strongly discouraged to keep Parliament functioning during the crisis.

– Mr Trump said the UK could be added to the list of European countries included in the US travel ban after he described cases of coronavirus as having risen “fairly precipitously” since the president initially announced the ban with the UK exemption.

– The leader of the Catholic Church in Ireland wrote to Stormont’s Education minister urging him to consider closing Northern Ireland’s schools over coronavirus. It came on the day the first cases of community transmission of Covid-19 not linked to travel were detected there.

– The death of the first patient in Scotland took the total for the UK to 11.

– The 2020 London Marathon, originally scheduled to take place on April 26, was postponed until October 4.

– The Football Association announced the Premier League will be suspended until April 4.

– It was announced that local and mayoral elections in May were being postponed for a year.

– Disneyland closed its parks, including Disneyland Paris, until the end of the month and suspended new departures on its Disney cruises.

– The health minister in Wales announced the suspension of non-urgent surgical procedures and outpatient appointments, and said as many as 20,000 people could die in the country in a worst-case scenario.

Scores of major sporting and cultural events have already been suspended, despite the Government resisting calls to ban mass events in its latest guidance earlier this week.

Scotland had already announced a ban on gatherings of more than 500 people.

Late on Friday a Whitehall source said: “Ministers are working with the chief scientific adviser and chief medical officer on our plan to stop various types of public event, including mass gatherings, beginning next week.

“We are also talking to businesses and other bodies about the timing of moving towards much more widespread working from home.

“There are many complex considerations to make all these measures as effective as possible.

“We will make the right decisions at the right time based on the best scientific evidence.

“We have drafted emergency legislation to give the government the powers it needs to deal with coronavirus, including powers to stop mass gatherings and compensate organisations.

“We will publish this legislation next week.”

The Times reported the laws could also give police and immigration officers to detain people if they are suspected of being infected and the ability to direct schools to stay open.

The newspaper said the laws could remain in place for two years.

The UK’s chief scientific adviser Sir Patrick Vallance had previously said while it is “eye-catching” to order the cancellation of mass gatherings and sporting events, the chances of contracting the disease by attending such occasions are slim.

The Whitehall source said officials are “concerned about the burden large events put on public services – including the health service and the police – from dealing with coronavirus”.

Sir Patrick has explained that the Government is hoping its approach to  tackling coronavirus will create a “herd immunity” to the disease.