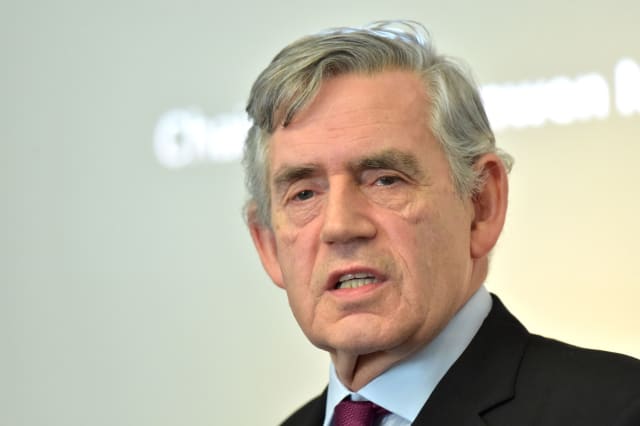 Gordon Brown has urged world leaders to come together in a “concerted global response” to tackle the coronavirus outbreak and prevent a new recession.

The former prime minister said the current generation of leaders had failed to learn the lessons of past crises – from epidemics to the financial crash – that global problems need global action.

He said rising nationalism looked set to prevent a co-ordinated response to the meltdown on financial markets amid fears that the world was heading for a recession.

Mr Brown called for an international scientific effort comparable to the Second World War Manhattan Project to build the atomic bomb to fast-track development of a vaccine for Covid-19.

His intervention came as Downing Street insisted Boris Johnson was clear that the crisis affecting countries around the world required a “global response”.

Mr Brown, who was credited with leading the international response to the 2008 financial crash, said that a “divided, leaderless world” was suffering from the tendency of nations to “go it alone”.

Writing in The Guardian, he said: “It need not be this way but one of the most disastrous weeks in the history of global medicine and global economics has ended with country after country retreating into their national silos.

“They are fighting their own individual battles against coronavirus and in their own way.

“National leaders still seem unable to apply or even absorb the hard-earned lesson that crises teach us, from the Sars epidemic and ebola epidemic to the financial meltdown: that global problems need global, not just local and national, responses.”

Mr Brown said a series of events in his first weeks as prime minister – including terrorist attacks, floods, a foot and mouth outbreak, avian flu and the first banking crash – had taught him the need for governments to respond with “decisive and overwhelming force and resolve”.

“In the financial crisis, governments did come together – with globally co-ordinated interest rate cuts, fiscal stimuli, currency swaps and anti-protectionist deals,” he said.

“A decade on, rising nationalism will likely block central bank co-operation and an early easing of trade restrictions.”

He added: “Coronavirus will not be the last, nor the worst, pandemic.

“But if the Manhattan Project could bring people together in the 1940s to create the most lethal weapon in human history, surely we can come together, in the 21st century, to save both lives and the livelihood of millions.”