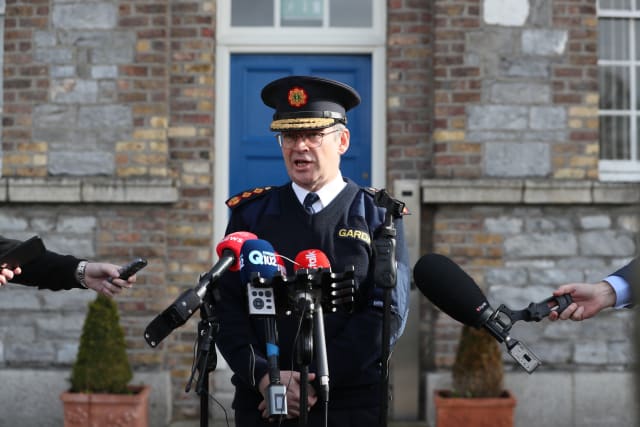 Irish police are maximising numbers in preparation for the potential impact of coronavirus.

Senior gardai are being asked to delay their retirement while hundreds of Garda students will next week be attested.

Garda Commissioner Drew Harris said the force is making sure it has enough numbers to “cope with whatever situation we may see in the future”.

A number of measures have been announced, including a contingency roster which will go into effect from Monday, while annual leave will be restricted to no more than 5% of a divisional workforce at any given time with effect from Friday.

Additionally, the force has hired 210 additional vehicles and non-essential travel will not be taken.

Commissioner Harris said the force is being “prudent” and “equipping our staff with measures in place to make sure that we can continue to protect society”.

Taking questions from the media at Garda headquarters in Dublin, Commissioner Harris refused to speculate on how many of his staff might be affected by Covid-19.

“We are in uncharted waters and so it would be wrong for me to speculate,” he said.

“What we have to do is maximise our resources, now if we have a self isolation-type scenario, we need to get those individuals tested, back to the front line if they can come back as quickly as possible.”

Commissioner Harris said while gardai have been seen at supermarkets, he stressed there is currently no fear of food shortages or of looting.

“People need to remain calm about the food supply and therefore then the fear of looting should not arise,” he said.

“We are there but that’s primarily to provide reassurance and to help with traffic flow, not that we have a fear of an outbreak of disorder or indeed looting.

“If we see an outbreak of criminality, if we see organised crime groups trying to exploit the situation, obviously we will be acting from an enforcement basis.”

Commissioner Harris added: “We do have concerns, we have seen it in other jurisdictions where fraudsters, organised crime groups have engaged in fraud, engaged in criminal activity based on the fears that they are exploiting in society, we are very alive to that, we want to make sure we are being proactive in combating organised crime groups and others who would seek to criminally exploit this situation as well.

“We are here to protect people, provide a policing service but also provide community support.”