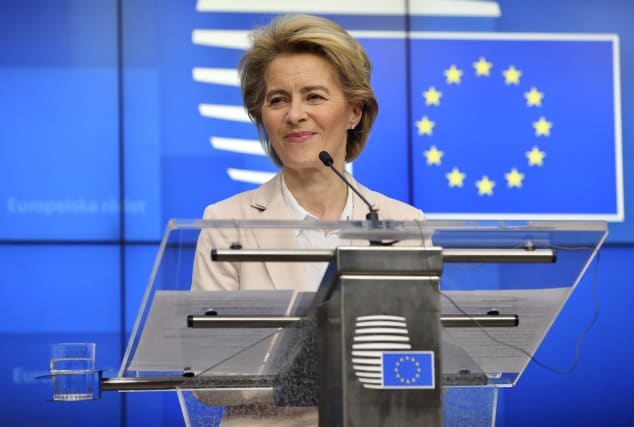 The European Union has urged member countries to put health screening in place at their borders to slow the spread of the coronavirus, and also pledged a 37 billion euro (£32 billion) aid fund.

The EU said it will allow “maximum flexibility” on state aid and fiscal rules to help member states weather the economic hit by the outbreak.

The virus is now present in all 27 EU countries. More than 22,000 cases of Covid-19 have been confirmed across Europe, and more than 1,000 people have died.

With Italy at the epicentre of Europe’s outbreak, neighbouring Austria and Slovenia moved to restrict traffic at their borders, raising questions about the movement of food and medical equipment. Other nations like the Czech Republic and Poland are also taking action.

“What we can do, and what we should do, is to carry out health screening measures,” Ms von der Leyen said.

Preliminary checks for signs of infection could be done at borders between the 26 nations that make up the passport-free Schengen Area, but also at the EU’s external borders and within individual countries, she said.

The ID check-free area is a jewel in Europe’s crown. Besides smoothing travel, it allows businesses and transport to move easily across borders of the countries within the Schengen zone, which share common security standards.

“Certain controls may be justified, but general travel bans are not seen as being the most effective by the World Health Organisation. Moreover, they have a strong social and economic impact, they disrupt people’s lives and business across the borders.”

She added: “Any measure that is taken must be proportionate” and co-ordinated with Brussels. “Member states, especially neighbouring ones, need to work very closely together. In this way, and it’s the only way, we can make sure that our citizens receive the health care that they need immediately wherever they are.”

Health screening recommendations were being put to the interior ministers of EU member nations as they try to build a unified response to the virus. The bloc’s institutions have a limited role to play in combating the pandemic and individual countries are responsible for their own health and public safety policies.

“The problem is on different levels in different countries,” Swedish interior minister Mikael Damberg told reporters, but he said: “We hope that all countries that take new measures also inform other European countries.

“The transportation system must work when it comes to food and to health care materials and these kinds of things that are important to all European countries so that we don’t make problems for each other handling the crisis.”

Croatian interior minister Davor Bozinovic, who is chairing the talks because his country holds the EU’s rotating presidency, said: “This crisis shows that as a European Union we need to have models to act in a more co-ordinated way.

“If we are acting in one way it would be much better for all of us.”

EU ministers are expected to discuss the 30-day travel ban imposed by President Donald Trump on Europeans leaving the Schengen Area for the US.

EU leaders have complained that the move was taken without consultation involving a disease that knows no borders.

The Schengen area includes many EU members but also others like Switzerland, Norway and Iceland.

The measures announced by Mr Trump do not apply to the UK, Ireland or any of the Balkan countries.