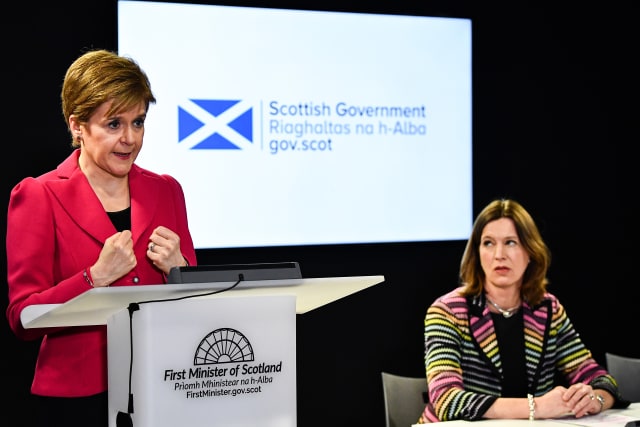 Taking draconian measures to deal with the coronavirus pandemic risks causing another spike in cases and would be “delaying the inevitable”, a Scottish health chief has warned.

Following the Scottish Government’s decision to cancel gatherings of more than 500 people from Monday, national clinical director Professor Jason Leitch also said he is “comfortable” about the Old Firm derby going ahead on Sunday.

On the Government’s measures to try and delay the spread of Covid-19, Mr Leitch said “draconian measures” such as closing borders, stopping travel and halting public transport would risk creating further problems in the future.

Mr Leitch, who is responsible for planning in the Scottish NHS, said: “The best science available says that if you allow the growth at a certain level – and you can’t control 60 million people exactly – we will control the rising of the peak and we won’t create a second peak.

“We fear that in other parts of the world that’s what they’re doing.”

On Thursday, First Minister Nicola Sturgeon announced large gatherings which require emergency service support or could impact the health service would cease from Monday in Scotland to “remove unnecessary burdens” on front-line services.

Addressing concerns that the fixture between Rangers and Celtic will still go ahead at Ibrox and could result in further spread, Mr Leitch said: “The shifts are already in place… the plans are already in place… so over the weekend we are comfortable we can manage both in the health service and at the Old Firm game.

“Organisers will make a judgment about what they want to do over the weekend but from Monday, in order to give a little bit of run-in time and in order for us to get those paramedics and ambulances and nurses and doctors at the front-line, we’ve chosen to stop them.”

He added there is “very, very weak evidence – despite what you intuitively think about being in a big, open air stadium – that is where the spread happens”.

On the potential for school closures, Mr Leitch said they are “not necessarily going to happen” as he explained children having to be looked after and their apparent lower contagion are two key reasons for not shutting them at this stage.

Asked about rumours that schools are planning to shut, Mr Leitch said: “I absolutely guarantee there is no plan right now, and no substantive rumours, that we’re going to close schools next week.

“Children aren’t getting sick in the main around the world. All the numbers we have so far are that children are not getting seriously ill.

“They are being infected by the virus; the virus is no respecter, unfortunately, of age or gender or ethnicity or borders, but they are not getting symptoms.

“You spread more when you have symptoms, so the children are less likely to spread those symptoms.”

Scotland’s Economy and Fair Work Secretary Fiona Hyslop also announced on Friday morning that an advice helpline for Scottish businesses has been set up, with companies able to call 0300 303 0660 for assistance.

As of 2pm on Thursday, 60 people in Scotland had tested positive for the virus.

Lanark Grammar School has temporarily closed for deep cleaning after a case of the virus was confirmed there.