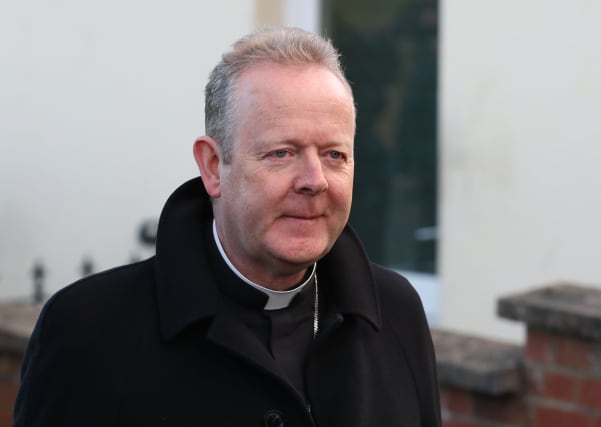 The leader of the Catholic Church in Ireland has written to Stormont’s Education minister urging him to consider closing Northern Ireland’s schools over coronavirus.

Archbishop Eamon Martin said the St Patrick’s weekend provided a “clear window” for parents to make childminding arrangements ahead of closures, and for schools to make contingency plans.

The move came on the day the first cases of community transmission of Covid-19 not linked to travel were detected in Northern Ireland.

While schools are closed in the Irish Republic as part of measures to combat Covid-19, disagreement has emerged at the heart of the Stormont executive over when Northern Ireland should follow suit.

Sinn Fein Deputy First Minister Michelle O’Neill has said closures should happen immediately, but DUP First Minister Arlene Foster has insisted the evidence from UK health authorities makes clear it is not the right time for the measure.

The letter from Archbishop Martin was addressed to Peter Weir and also sent to the Council for Catholic Maintained Schools (CCMS).

An extract of the letter, which has been seen by the PA news agency, said:

“The schools’ break for the Saint Patrick’s weekend provides a clear window of opportunity for parents to make plans for childminding and for schools to consider contingency plans for ongoing tuition and contact with their pupils.

“I feel it is important to give very strong consideration to the closure of all schools in the very near future and on a specific defined date. We need to fight this virus together.”

Health officials in Northern Ireland recorded the biggest increase in numbers affected so far on Friday.

Health service activity will be “significantly curtailed” as doctors and nurses are marshalled to delay the spread of the infection, Health Minister Robin Swann said.

Another nine positive cases were detected on Friday, bringing the total to 29.

The Public Health Agency (PHA) said: “The move from containment to delay is timely as we have now seen our first cases of community transmission in Northern Ireland – three of the nine new cases published today.

“This was expected and highlights the importance of the additional guidance that has been put in place to reduce the spread in our community.”

Mrs Foster told PA she was “disappointed but not surprised” by Mrs O’Neill’s call for schools to be closed immediately.

She warned that closures could last for five months.

The DUP leader accepted it will happen at some time, but the timing was important to have the maximum impact in flattening the infection’s peak and protecting the elderly and vulnerable.

She said: “Our job is to follow the science and take decisions based on science.”

Mrs Foster said some parents on low incomes relied on school meals to feed their children.

On Friday night the Department of Education told PA it was in discussions with other Stormont departments on how to mitigate the impact of the loss of free school meals for the 97,000 children entitled to them.

The DUP leader said the peak will be in 14-16 weeks and it was appropriate to take action when science told them to.

“When we receive that advice we will act on that advice and make sure we do everything in our power to try to protect our citizens,” she said.

“Once we close schools the schools will be closed for the summer.”

Mr Swann said health services across the globe are coming under severe pressure.

“Ours is no different,” he said. “We have now started freeing up resources in our health service to provide hospital care for the most seriously ill Covid-19 patients.”

Suspect cancer cases and other urgent care will continue.

Anyone displaying symptoms has been urged to self-isolate.

The devolved department in charge of benefits announced the temporary removal of the three-day waiting period for statutory sick pay.

People who need to self-isolate for medical reasons to protect others will be treated as being ill.

Venues for health services may change as providers try to manage and centralise in a bid to maintain services.

For patients who need a follow-up as outpatients, health authorities are planning for greater use of telephone contact and other digital technology.

She claimed the public were concerned and fearful and the difference from the Republic of Ireland’s approach was causing confusion.

The Republic has implemented blanket closures, and teachers just a few miles away from each other across the open Irish border are following different official approaches.

Mrs O’Neill said: “Now is the time to take action and ensure the schools, universities and colleges are closed and that needs to happen immediately.”

She said large numbers of parents had decided not to send their children to classes today and the Government needed to listen to the public.

She added: “People are fearful.”

Medical officials in Belfast are wary of acting too soon before there is evidence of community transmission, meaning the path of the virus cannot be traced.

In Ireland, schools, colleges, childcare facilities, museums and other tourist attractions have been closed in a major lockdown aimed at thwarting the spread of the virus and guided by European and scientific experts.

Sinn Fein finance minister Conor Murphy said: “The Executive is very clear that we should and will be doing all in our power to do the best we can to offset the damage that this health issue will bring to everyone.”