Woman did not report Salmond to police due to independence campaign, court told 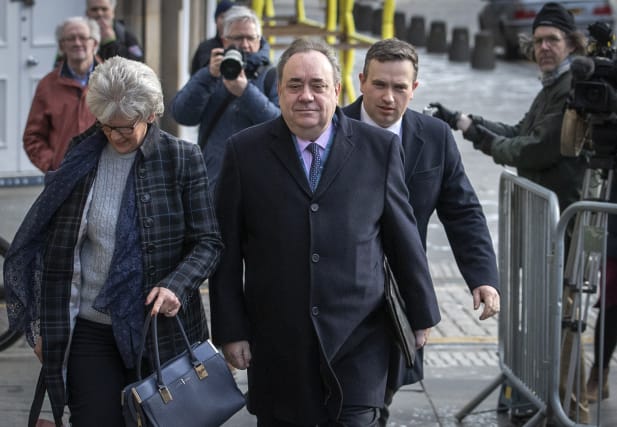 A civil servant said reporting Alex Salmond to police after an alleged sexual assault would have been “unthinkable” due to the upcoming Scottish independence referendum.

The High Court in Edinburgh on Thursday heard the former first minister of Scotland got on top of the woman on a bed, kissed her “sloppily and haphazardly” and murmured she was irresistible.

Salmond is on trial over accusations of sexual assault, including an attempted rape. The 65-year-old denies all the charges.

He is accused of assaulting the woman at the first minister’s official residence, Bute House, in late 2013, around nine months before the vote.

The complainer, known as Woman F, said she was concerned any police proceedings might get into the “public sphere”.

She said: “That would have been unthinkable, partly because of the political context.

“Our job involved protecting the first minister and his reputation.”

She added: “Going to anyone outside seemed completely unthinkable.

“This was a run-up to a referendum on independence, everything we did outward-facing had potential ramifications.”

Woman F, who was being questioned by advocate depute Alex Prentice QC, told the court Salmond said the pair should go to his bedroom for work as it was cold.

It was heard he then brought out a bottle of white Chinese spirit called Maotai and she drank a little.

She said he kept trying to top up her glass while he drank “steadily” until it was empty.

The prosecution witness added: “I had a little, the first minister had had rather more.”

When she got up to leave, she said Salmond told her “firmly” but not “aggressively” to get on the bed.

She added: “I felt quite panicked.”

After sitting on the edge of the bed, the woman said Salmond got on top of her and began to kiss and touch her and murmured that she was “irresistible”.

The complainer said: “The first minister was lying on top of me, he had his hands under the skirt of my dress and ran them over my thighs and my bottom.

“He was also running his hands over the bodice of my dress and over my breasts.

“He was kissing me around my face, quite sloppily and haphazardly, and he was repeatedly murmuring a phrase – it was something like ‘you’re irresistible’.”

The Scottish Government official, who is the fourth complainer to give evidence, earlier said she had thought Salmond was going to “take things further” but later apologised after a meeting was arranged.

She added: “I thought that he was going to remove my tights and my underwear, that he would be pushing the encounter physically further.”

She said: “The first minister told me that he was sorry for what had happened, it had been unacceptable.

“He said that he had been drinking more than usual, not just that night but in general due to stress.”

Gordon Jackson QC, representing Salmond, put it to the complainer that the incident had been a “sleepy cuddle”, which the complainer rejected, and then she got up to leave.

He said: “He didn’t try to restrain you, he didn’t block your path to the door, he never said ‘please don’t go’.

“It was clear this wasn’t happening. You leave and he said ‘goodnight’.”

The woman told the court Salmond had kissed her on a previous occasion at Bute House.

She said: “I was preparing to leave and the first minister kissed me on the mouth, then smiled at me and said ‘goodnight’.”

When asked if she had invited him to kiss her or agreed to him kissing her, she added: “No, absolutely not.”

Mr Jackson described the accused as a “tactile human being”.