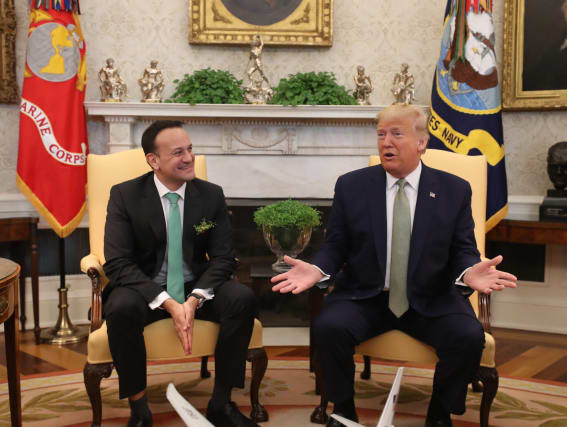 Leo Varadkar has discussed the issue of the undocumented Irish in America during his meeting with the US president.

The Taoiseach, who is in Washington DC for the traditional St Patrick’s Day visit, raised the issue in an effort to resolve the problems for Irish citizens in the US.

A Bill which could give Irish citizens access to thousands of US visas every year was passed by the US House of Representatives on Monday.

The plan to add to the E-3 visa programme will now be voted on by the US Senate.

Mr Varadkar travelled to the White House on Thursday where he held discussions with Mr Trump.

Asked if Irish citizens will always be welcome in the US, Mr Trump said: “Always, always.

“Just like your Prime Minister (Taoiseach). They will not only be welcomed – loved.

“We have millions (of Irish citizens). It changes every year. I think it’s actually bigger now.”

Mr Varadkar said there are more than 35 million Americans who claim Irish heritage.

Mr Trump replied: “It’s got to be one of our biggest. We love the Irish.”

Asked if he will discuss the inclusion of Irish citizens in the E3 Visa Bill, Mr Trump said: “We are going to be looking at that, we are gonna (sic) be talking about that today. It’s a very important part of our conversation today.”

The pair also discussed the threat of coronavirus and the decision to impose a ban on people travelling from some European countries to the US.

The President said the reason the UK was not included in his Covid-19 travel ban was down to its strong borders.

Mr Trump said: “It has got very strong borders and they are doing a very good job.

“They don’t have very much infection at this point and hopefully they will keep it that way.”

Mr Trump said he hoped the pandemic would “work out well for everyone”, but added there was reason to briefly restrict some movement between parts of the world.

Mr Varadkar said one of the reasons Ireland was exempted from the ban was the presence of US border security in Ireland, at Dublin airport.

“I was through it myself yesterday. They were asking the right questions,” he said.

Mr Varadkar is taking part in a number of other formal engagements in Washington DC before he returns to Ireland on Thursday night.