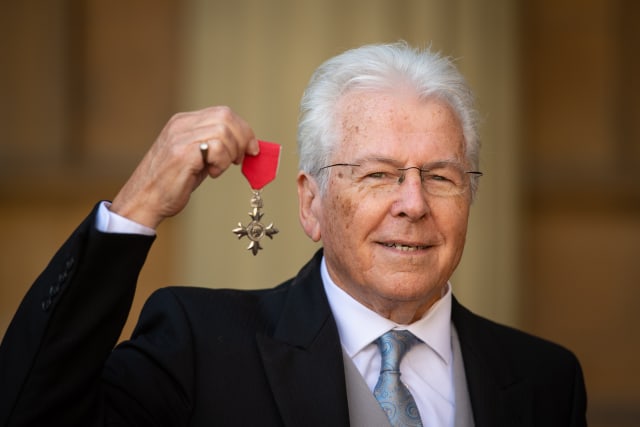 A founding member of the 1960s Merseybeat band the Searchers has said he plans to continue touring and performing as he received an MBE for services to music.

Vocalist Mike Pender said it was “absolutely brilliant” that the Prince of Wales remembered some of the group’s songs while collecting his honours at Buckingham Palace on Thursday.

The Searchers formed in Liverpool and found fame in 1963 with their recording Sweets For My Sweet, the first of three number one hits for the group.

Following the investiture ceremony, the 79-year-old said “so many big things” had happened in he and the other band members’ lives over the last 55 years.

“Three number one records, appearing on the Ed Sullivan show, going to America and being met at the airport just like the Beatles, doing the Royal Variety Show, meeting her Majesty the Queen,” he told the PA news agency.

“We’ve had lots of things for the group in the past, but obviously the group is gone now, really.”

On collecting his honour from Charles, Pender said: “I mentioned some of the songs and he said, ‘I remember Needles And Pins. So that was brilliant, absolutely brilliant.”

Continuing to perform around the UK and across the globe, he is embarking on his 80th Birthday Tour this year.

“I still enjoy it, walking out on stage, all of those people,” he told PA.

“And when you sing some of the hits that you had, they know all the words, they sing along with you.

“It’s like a walk down memory lane for all of those people.

“They are from the era that we were big and we are still here to entertain them.”

Pender said he feels “much younger” than 79, and is due to tour New Zealand and Australia later this year.

He told PA: “Every year, I get a phone call from the same agents and they say, ‘Mike, will you do another tour?’.

“And I think about it and my heart wants to say yes, but my body is sort of saying, hang on a minute Mike.

“I’m 79 but I still feel much younger, probably because I’ve still got some ego left in me.”

Composer Helen Grime also collected an MBE for services to music at the palace on Thursday.

The 39-year-old has been commissioned by ensembles and organisations such as the BBC Proms and London Symphony Orchestra.

Following the ceremony, she said she was “surprised and shocked” to have been named among the New Year Honours List.

“It’s really nice for classical music to get some recognition,” Grime told PA.

“I think it’s great as a relatively younger woman composer, it’s a really nice message to send out to the next generation of composers.

“That it is a field for anyone, and that it’s more diverse than it used to be.”