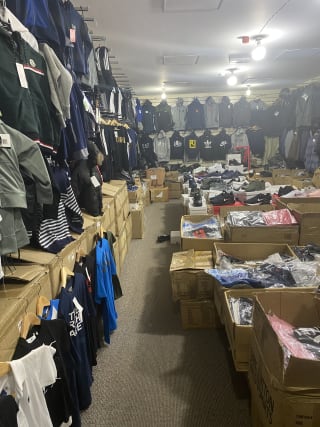 More than £7.5 million of suspected counterfeit clothing, watches and perfume has been seized by police during raids in Manchester.

The operation, which involved 100 police officers and staff, saw three premises in Cheetham Hill searched and 15 people arrested on Wednesday.

Of those arrested, 11 were detained for offences relating to the distribution of counterfeit goods and four for immigration offences, the City of London Police said.

Officers worked through the night to clear the three units, with shoes, handbags, wallets and sunglasses among the items seized, police said.

The search warrant was carried out following a previous operation involving the sale and distribution of counterfeit items online, police said.

“An individual may think that when buying counterfeit goods they are only affecting a multimillion-pound brand, but in reality they are helping to fund organised criminal activity. ”

Counterfeit goods can pose a health risk to consumers as they usually do not go through legal health and safety checks, she added.

Mobile phones and cash were seized from those arrested during the raid, with the investigation still ongoing, police said.

Chief inspector Kirsten Buggy, of Greater Manchester Police’s North Manchester division, said: “Yesterday’s operation is one of the largest of its kind ever carried out in the area and has taken a meticulous amount of planning and preparation.”

“They’re harming legitimate businesses and making absolutely no contribution toward public services or the UK economy.”

He added: “We urge consumers to stop buying goods from these types of premises and think twice about the goods they buy online, because counterfeit goods are often of poor quality and, more worryingly, can be unsafe and even dangerous.”