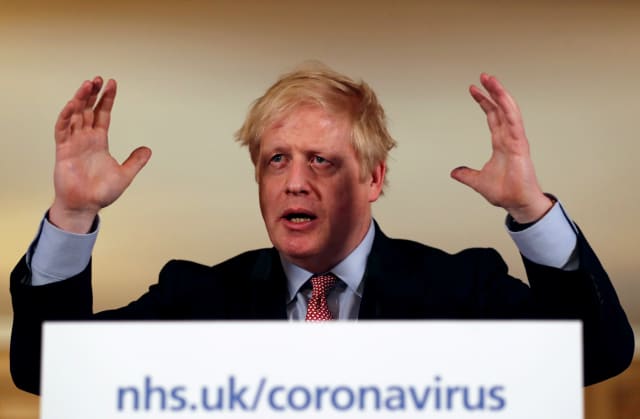 New measures to delay the spread of coronavirus in the UK have come into full force as officials tackle the “worst health crisis in a generation”.

Up to 10,000 people are thought to be infected with Covid-19 already and, in a stark warning to the public, Boris Johnson said families will continue to “lose loved ones before their time” as the outbreak worsens.

High-profile people to be diagnosed with the disease include Arsenal head coach Mikel Arteta and BT boss Philip Jansen, and the situation has been branded a “national emergency” by former health secretary Jeremy Hunt.

The latest Government approach has seen measures introduced to try to protect the elderly and those most vulnerable to the disease, with Mr Johnson warning that the precautions will mean severe disruption across the country “for many months”.

– The number of people who have tested positive for the virus in the UK rose to 596 while the death toll is 10.

– The Premier League announced it would hold an emergency club meeting on Friday morning regarding future fixtures after Arteta tested positive for the virus. It was later confirmed Arsenal and Brighton’s match set for Saturday has been postponed.

– The FTSE 100 closed the day down by more than one 10th as fears over Covid-19 sparked the index’s worst bloodbath since 1987.

– The World Health Organisation said it was “deeply concerned” some countries are not handling the pandemic with “the level of political commitment needed to control it”.

– The Electoral Commission recommended local elections in May be postponed.

– Stormont ministers insisted it is not the right time to close Northern Ireland schools over coronavirus, despite the announcement by the Irish Republic that schools will be shut south of the border.

The new guidance means anyone with coronavirus symptoms, however mild, such as a continuous cough or high temperature, must stay at home for seven days.

While the measures are not as extreme as other countries like Italy and the Republic of Ireland, officials have warned the current approach could change as the disease – the risk rating for which has been raised to high – becomes more widespread.

Mr Johnson told reporters at a press conference in Downing Street: “We’ve all got to be clear, this is the worst public health crisis for a generation.

School trips abroad should be stopped, people over 70 with serious medical conditions are being told not to go on cruises and officials warned the advice is likely to develop to mean that if someone becomes ill, their entire household could be told to self-isolate.

Mr Hunt was critical of the Government’s approach, saying he found it “surprising and concerning” that more was not being done in terms of cancelling large events and allowing visits to care homes.

He told BBC Newsnight: “I think it is surprising and concerning that we’re not doing any of it at all when we have just four weeks before we get to the stage that Italy is at. You would have thought that every single thing we do in that four weeks would be designed to slow the spread of people catching the virus.”

Scotland has already banned mass gatherings and Mr Johnson said the Government is keeping that kind of measure “up our sleeves”.

One expert said there is a danger that people in whom the virus presents as similar to a common cold may not realise they should self-isolate.

Professor Jonathan Ball, professor of molecular virology at the University of Nottingham, said the Government advice, which specifies persistent cough and raised temperature, “needs careful consideration by those charged with mitigating the impact of this pandemic”.

The Prime Minister has defended the UK’s approach to the pandemic, which has so far been less dramatic than the likes of the US, saying the Government is being guided by the best science and trying to get the timing right for people to take the situation seriously.