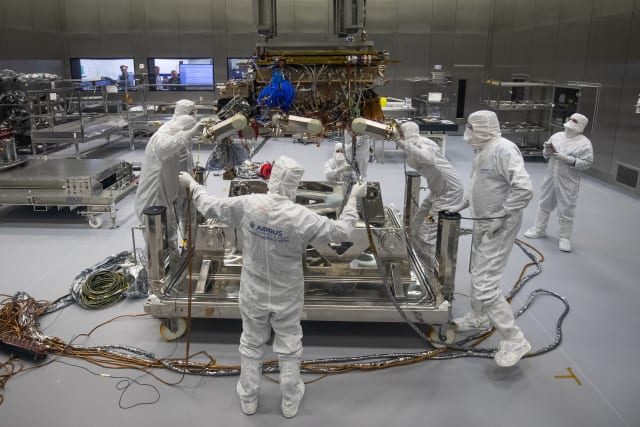 The ExoMars mission to the red planet has been postponed for at least two years.

The European Space Agency (ESA) and Russian state space corporation Roscosmos announced the Rosalind Franklin rover will not be ready for the scheduled launch to Mars in the summer.

Revealing the delay at a video press conference from Paris, ESA director general Jan Woerner said a number of tests still needed to be successfully conducted, but there would not be enough time before the launch window.

Given that the journey from Earth to Mars can only be attempted when the planets are in specific positions, the next launch date will not be until 2022.

Prof Woerner said: “After carefully reviewing reports, we have together accepted the advice that launching this year would mean sacrificing essential remaining tests.

“So we have therefore jointly decided and today confirmed this decision to move the ExoMars mission to a later launch opportunity, namely 2022.

“This is a very tough decision, but it is, I’m sure, the right one.”

Named after the British DNA pioneer Rosalind Franklin, the six-wheeled robot will search for life on Mars.

It is equipped with a two-metre drill to take samples from below the surface where they will have been protected from the harsh radiation environment.

Europe’s first planetary rover was assembled at Airbus in Stevenage.

The project, which started in 2005, has waited a long time for completion, facing a number of obstacles along the way.

The briefing was due to take place in Moscow but the coronavirus outbreak meant it was conducted via video, with Roscosmos director general Dmitry Rogozin unable to join because of technical difficulties.

ExoMars is a joint programme between ESA and Roscosmos, with the primary goal to determine if there has ever been life on Mars.