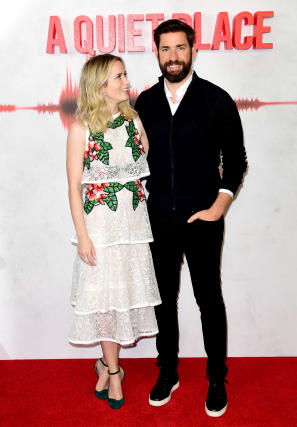 The release of A Quiet Place II has been postponed as the entertainment industry continues to be impacted by the coronavirus outbreak.

It comes a week after the release of James Bond film No Time To Die was pushed from April to November amid concerns about the spread of the virus.

Director John Krasinski wrote on Twitter: “One of the things I’m most proud of is that people have said our movie is one you have to see all together.

“Well due to the ever-changing circumstances of what’s going on in the world around us, now is clearly not the right time to do that.

“As insanely excited as we are for all of you to see this movie… I’m gonna wait to release the film til we CAN all see it together!

“So here’s to our group movie date! See you soon!”

A Quiet Place II, a sequel to the 2018 horror hit starring Krasinski’s wife Emily Blunt, was due to be released in the UK on March 20.

A string of entertainment events have been casualties of the coronavirus outbreak.

The European premiere of Mulan, which is being held in London on Thursday, will no longer have a red carpet but will instead be limited to an inside screening.

Production on the second series of Carnival Row, starring Orlando Bloom and Cara Delevingne, has been suspended, with Bloom saying he is heading home to the US, where his fiance Katy Perry is expecting their first child.

The Bafta games awards will no longer be a red carpet ceremony on April 2 and will instead take the form of an online live stream.

Bafta said: “The health and wellbeing of our guests and our staff remain our top priority, so there will be no live audience and we are now in the process of informing all our nominees, guests, partners and suppliers of the change.

“The new format will include the announcement of the games awards winners and we look forward to sharing more updates in the coming weeks.”

Meanwhile, The Who have postponed their UK and Ireland tour due to concerns around fan safety.

The band were due to kick off their tour at the Manchester Arena on Monday, with shows continuing until April 8 at Wembley SSE Arena.

In a statement, the band said the dates will be rescheduled and that all tickets will be honoured.

Roger Daltrey said the shows will “definitely happen and it may be the last time we do a tour of this type, so keep those tickets, as the shows will be fantastic”.

Pete Townshend said the band have not “reached this decision easily, but given the concerns about public gatherings, we couldn’t go ahead”.

They will also be unable to appear at the Royal Albert Hall on March 28 as part of a series of Teenage Cancer Trust shows, but they intend to reschedule the performance.

The entertainment industry has been thrown into turmoil by the coronavirus pandemic, with major events either postponed or cancelled.

Health officials around the world have advised against mass gatherings in an attempt to stop the spread of Covid-19.

Doubts now surround big events set to take place in the coming months, including the Eurovision Song Contest in Rotterdam in May, June’s Glastonbury Festival in Somerset and the San Diego Comic-Con in July.

– Celebrity Race Across The World

Producers Studio Lambert and the BBC decided to postpone production of the celebrity version of Race Across The World.

A spin-off of the regular series, the programme is set to see stars “stripped of mod cons and luxuries” as they attempt to travel thousands of miles across different countries without taking a flight.

A BBC spokeswoman said: “Celebrity Race Across The World involves contestants travelling across a number of different countries, and given that official advice in relation to specific countries is continually changing in line with the spread of Covid-19, Studio Lambert has decided to delay production on this series in consultation with and supported by the BBC.

“We will continue to review all productions on a case by case basis following the latest news and advice from the Foreign Office, World Health Organisation and Public Health England.”

The festivals were supposed to take place in the California desert in April but have been pushed back to October.

Coachella, one of the world’s biggest music festivals, attracted about 250,000 attendees over its two weekends last year.

A string of major companies had already pulled out, including Facebook, Twitter, Apple and Amazon, when Austin mayor Steve Adler implemented an emergency order.

He said: “I have issued an order that effectively cancels South By Southwest this year.”

One of the biggest film releases of the year was postponed from April to November when producers pushed back James Bond film No Time To Die.

MGM, Universal and Bond producers Michael G Wilson and Barbara Broccoli said they arrived at the decision after “careful consideration” and “thorough evaluation of the global theatrical marketplace”.

Widely known as E3, the annual event draws the biggest names in video games to Los Angeles each year.

It was set to take place in June but a spokesman said the team was “devastated” to cancel the event.

They added: “This decision was not reached lightly, but it is the right one for the health and safety of all involved.”

The ceremony was due to take place at the Forum in Inglewood, California, with Chance the Rapper on hosting duties.

But Nickelodeon has postponed the event in “consideration of the safety and well-being of every person involved with the show, which is our top priority”.

The LGBTQ awards show was set to take place in New York next week but was cancelled on Wednesday.

Prolific TV producer Ryan Murphy and veteran actress Judith Light were among those being honoured.

The organisation said it would provide an update “in coming weeks” on the Los Angeles awards show scheduled for April, where Taylor Swift is due to receive the vanguard award.

The National Association of Theatre Owners announced the decision to cancel this year’s event shortly after Donald Trump unveiled the suspension on travel between the US and continental Europe.

The body said the ban, added to travel restrictions elsewhere, meant a “significant portion of the worldwide motion picture community is not able to attend”.

The annual gathering of film theatre owners from around the world was scheduled to run from March 30 to April 2 in Las Vegas.

The major TV festival in Los Angeles was due to host shows including HBO comedy Curb Your Enthusiasm, time-travelling drama Outlander and Star Trek: Picard later this month.

But organisers said that out of an “abundance of concern” it was being postponed.

A spokesman added: “We are exploring options to reschedule the festival and all ticket purchases will be honoured for the new dates.”

The revered actress, 84, had been set to receive a lifetime achievement award from the American Film Institute on April 25.

But it has been postponed, with a new date to be announced.

The Seattle-based rock band postponed the North American leg of their tour due to the virus outbreak.

In a statement, the group said it was with “deep frustration and regret” that they were pushing back the Gigaton 2020 tour.

The first date was set for March 18 in Toronto, with 13 other cities scheduled across Canada and the US. The European leg, beginning in Germany in June, is listed on Pearl Jam’s website as still going ahead.

The literary event was cancelled earlier this month.

It was due to take place at Olympia London from March 10 to 12 before organisers pulled the plug.

Reed Exhibitions said the London Book Fair will return next year, “better than ever”.

Earlier this week the Royal Television Society (RTS) announced its Programme Awards, due to take place on March 17, will be held behind closed doors.

RTS said it has been monitoring the current climate in line with official guidance against large gatherings of people, and decided to streamline the format of the ceremony.

Nominees – who include Phoebe Waller-Bridge, Suranne Jones and Jared Harris – and RTS representatives will still be able to attend the event, which will now be more intimate, and the broader industry will be able to watch the ceremony via a live link.