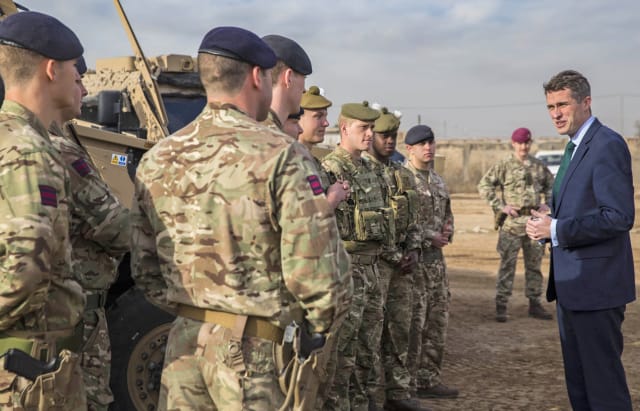 One of the US’s leading generals has suggested Iran was behind a missile attack on a base in Iraq that killed a British soldier and two US servicemen.

General Kenneth McKenzie, commander of United States Central Command (CENTCOM), told a US Senate committee in Washington he suspected Iranian proxy group Kataib Hezbollah was to blame because it is the “only group known” to have carried out similar attacks.

More than a dozen missiles were fired at Camp Taji, north of Baghdad, injuring another 12 military personnel.

The British soldier killed in the Taji attack was a member of the Royal Army Medical Corps.

Earlier on Thursday, US Secretary of State Mike Pompeo said the attack would “not be tolerated”, while Foreign Secretary Dominic Raab said it was a “cowardly” act.

“While we are still investigating the attack, I will note that the Iranian proxy group Kataib Hezbollah is the only group known to have previously conducted an indirect fire attack of this scale against US and coalition forces in Iraq.

“While periods of decreased tension may provide the illusion of a return to normalcy, ample intelligence and indeed yesterday’s actions indicate the Iranian regime’s desire to continue malign activities that threaten lives, destabilise sovereign nations, threaten freedom of navigation, regional commerce, global economic supplies and the global economy itself.”

The general added the coalition presence in Iraq had established a “rough deterrence” against Iran meaning they no longer carried out “attributable” missile strikes against US bases.

But he warned “proxy” attacks were likely to continue.

The Iraqi military has opened an investigation into the attack, which came amid mounting tensions between the US and Iran.

Mr Raab and Mr Pompeo have discussed the attack and how to respond.

Mr Pompeo said they had agreed “those responsible must be held accountable”.

Mr Raab said: “We will defend against these deplorable acts and hold those responsible to account.”

Prime Minister Boris Johnson said: “We will continue to stay in close contact with our coalition partners to establish exactly what happened.”

He added: “We shall not forget their sacrifice and will ensure those who committed these acts face justice.

Taji air base is used as a training site for coalition forces.

Officials did not say what group they believe launched the rocket attack but Kataib Hezbollah or another Iranian-backed Shia militia group is likely.

It led to protests at the US embassy in Baghdad which was followed on January 3 by the air strike that killed Soleimani and Abu Mahdi al-Muhandis, a leader of the Iran-backed militias in Iraq, of which Kataib Hezbollah is a member.