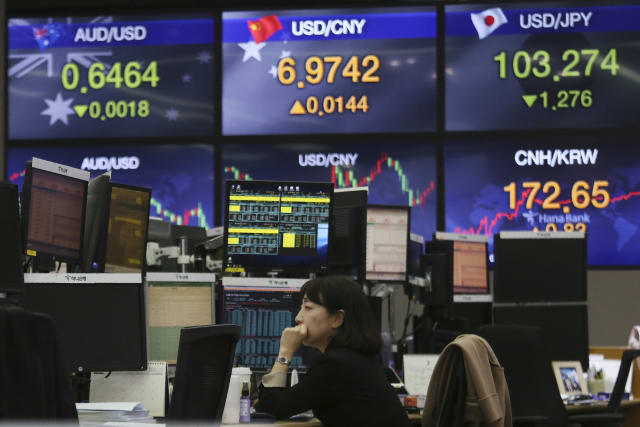 Global shares plunged on Thursday after the World Health Organisation declared a coronavirus pandemic and indexes sank on Wall Street.

The future contract for the Dow Jones Industrial Average slumped 5.2% while the S&P 500 lost 4.9%.

On Wall Street overnight, the Dow fell into bear market territory, with a loss that dragged it 20% below the record set last month.

The broader S&P 500, which professional investors watch more closely, is a single percentage point away from falling into its own bear market, which would end the longest bull market in Wall Street history.

There was no sign of a revival of confidence in Asia.

Thailand’s benchmark plunged 10% in the afternoon session, triggering a 30-minute halt to trading. After it resumed, the benchmark remained down 10%. India’s Sensex swooned 7%.

“Some of the biggest markets, such as Hong Kong or Japan or Australia, are down around four to five per cent. And we haven’t seen, you know, a significant buy-in interest yet, so traders are still in the get-out mode. They just want to have it in cash,” said Jackson Wong of Amber Hill Capital Ltd, in Hong Kong.

“So that’s a typical panic mode, but whether this panic mode will stop in the short term, it really will depend on how the virus incident goes forward,” Mr Wong said.

The recent decline has been one of Wall Street’s swiftest retreats of this magnitude. The fastest the S&P 500 has ever fallen from a record into a bear market was over 55 days in 1987.

Vicious swings like Wednesday’s session are becoming routine as investors rush to sell amid uncertainty about how badly the outbreak will hit the economy.

The day’s loss of 1,464.90 points wiped out a 1,167-point gain for the Dow from Tuesday and stands as the index’s second-largest point drop, trailing only Monday’s plunge of 2,013.

With Wall Street already on edge about the economic damage from the virus, stocks dove even lower on Wednesday after the World Health Organisation cited “alarming levels of inaction” by governments in corralling the virus when it made its pandemic declaration.

Investors are calling for coordinated action from governments and central banks to stem the threat to the economy from the virus.

While lower interest rates and government spending will not solve the crisis — only containment of the virus can — but they can support the economy.

US president Donald Trump’s announcement of travel restrictions for most European countries and a multibillion-dollar aid package that the House could vote on on Thursday failed to lay doubts to rest.

For most people, the new coronavirus causes only mild or moderate symptoms, such as fever and cough.

For some, especially older adults and people with existing health problems, it can cause more severe illness, including pneumonia.

The vast majority of people recover from the new virus, but the fear is that Covid-19 could drag the global economy into a recession, with slowdowns in production and a plunge in business activity as people stay home instead of travelling or dining out.

Many analysts say financial markets will continue to swing sharply until the number of new infections stops accelerating.