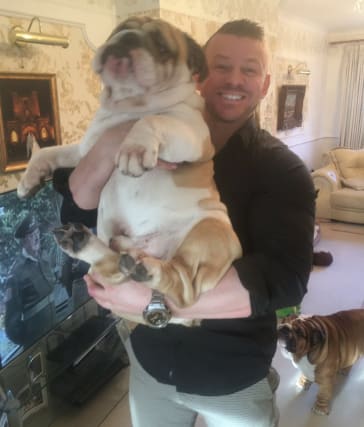 The boss of a fitness firm has offered a £3,000 reward to catch the masked raiders who attacked him with a hammer and a machete in his own home.

Jonathan Hair, the 38-year-old founder of the Skinnypigs business, was repeatedly stabbed and his English bulldog Pork was also hurt by the three robbers who burst into his Sunderland home.

The trained fitness instructor woke to hear noises in the house and confronted the men on his stairs, grabbing the first one, but was overpowered and was stabbed in the legs and hit on the head with the hammer.

The men threatened to cut off his toes if he did not hand over cash, and he suffered deep cuts to his fingers as he struggled to fight them off.

His ordeal only finished when he handed over £4,000 in cash which he had in a cabinet.

The raid coincided with him collecting the takings for January from franchisees of the popular Skinnypigs fitness sessions which are run all over the North East of England.

Mr Hair, who is single, said his fingers were so damaged he could not use his phone to call the police, and in any case pouring blood was covering the screen of his smartphone.

He told the PA news agency: “They smashed me in the nose and it is broken in 14 places.

“They cut the tendons in my fingers and I still cannot move them properly.”

The businessman believed the gang turned up with weapons knowing he was a strong fitness instructor.

Mr Hair is recovering from his ordeal, but said his bulldogs Pork and Chop were still upset.

Pork was slashed and Mr Hair thinks both dogs were beaten before the robbers shut them out of the way.

“Pork is terrified to be away from me,” he said.

“He has barely eaten since this happened.”

Mr Hair has offered a £3,000 reward for information which leads to the conviction of his attackers.

Northumbria Police said three men aged 37, 32 and 22 have been arrested on suspicion of aggravated burglary and have been released under investigation following the January 23 attack.