Donald Trump and Leo Varadkar greet one another with namaste gesture 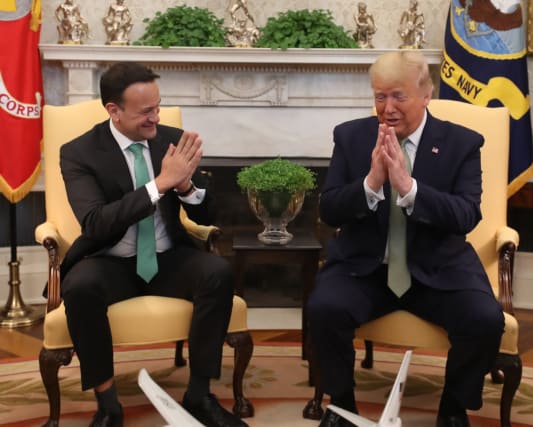 US president Donald Trump and Irish premier Leo Varadkar did not shake hands but instead greeted each other with a namaste gesture, as countries tighten restrictions on social contact amid the coronavirus outbreak.

The two leaders acted on official health advice by making a bow gesture when they met at the White House on Thursday.

The president said he “felt weird” with the non-contact gesture.

Since the outbreak of Covid-19, health experts have warned the public over the dangers of social contact and urged people to avoid the traditional greeting of hand-shaking.

Speaking in the Oval Office, Mr Trump said: “We didn’t shake hands today and we looked at each other and said, ‘what are we going to do?’

Mr Trump said the pair opted for a bowing gesture.

He added: “I just got back from India and I didn’t shake any hands there and it was very easy.”

He referred to traditional greetings used in India and Japan, adding that the countries were “ahead of the curve”.

Mr Trump added: “We looked at each other – there was also a lot of press staring at us, right – saying, are we supposed to shake hands? And when his group of very smart representatives came in, who I know, it’s a very strange feeling.

“I was never a big hand-shaker, as you probably heard, but once you become a politician, shaking hands is very normal.

“It’s a very strange feeling when people that you know and like and they walk up and just say ‘hi’.”

Mr Varadkar added: “It always feel impersonal or you are being rude but we just can’t afford to think like that for the next few weeks.”

Mr Trump said he hoped the coronavirus pandemic would “work out well for everyone”, but added there was reason to briefly restrict some movement between parts of the world.