Coronavirus will cause significant changes to day-to-day life, Sturgeon warns 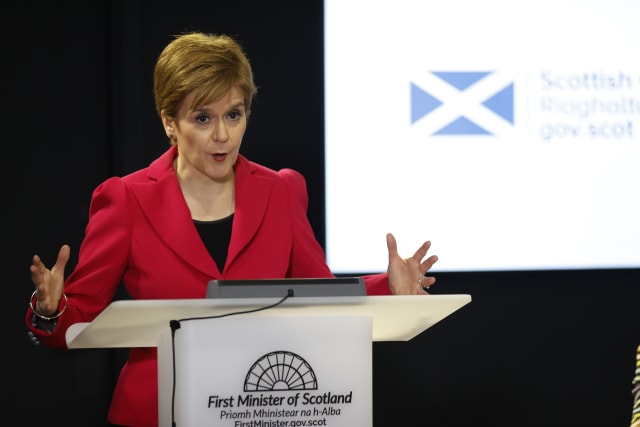 Nicola Sturgeon has warned of disruption to people’s day-to-day lives due to the outbreak of coronavirus in Scotland.

She said mass gatherings of more than 500 people will be cancelled to ease pressure on the NHS rather than as an effective way of delaying the spread of Covid-19.

Giving a statement outlining the new advice after the UK moved from trying to contain the Covid-19 outbreak to a delay phase, Scotland’s First Minister said anyone with even mild symptoms indicative of coronavirus should self-isolate for seven days.

Speaking at a press conference in St Andrew’s House in Edinburgh after the Cobra meeting, Ms Sturgeon said: “We are entering a period where there will be significant changes to people’s day-to-day experiences.

“That is going to affect all of us and the difficult judgments that are involved in that have to be taken.

“Our responsibility is to do that in a way that protects – as far as possible – our ability as a society to deal with the impact of what we are going to be facing.”

The number of confirmed cases in Scotland almost doubled from 36 to 60 in the latest daily figures, released at 2pm on Thursday, which showed 2,892 tests have been carried out so far, with 2,832 tests confirmed negative.

Large gatherings of more than 500 people that require police or paramedics, or could impact on the health service, will be cancelled from Monday.

The decision was taken by the Scottish Government, rather than at a UK-wide level, Ms Sturgeon said, and would apply to events such as large football and rugby matches and concerts.

She added: “This is not an ordinary situation and I know the wider public understand that.

In addition to the “consistency of public messaging at a time like this”, the First Minster said the most important reason was to not put unnecessary strain on the front-line emergency services.

She said: “We know that certain events have an impact on our policing and front-line health services, accident and emergency and ambulance services.

“Our health services in particular will be under acute pressure in the weeks and months to come and I think it incumbent on Government to do what we can to remove unnecessary burdens.”

Specific symptoms which would require self-isolation would be “a fever or a persistent cough,” Ms Sturgeon explained, adding people will not be routinely tested to see if they have the virus.

While the advice for schools and universities continues to be to remain open, she said overseas school trips should not go ahead.

The First Minister said the schools decision remains “under close, ongoing review”, adding their closure would have a direct impact on front-line staff who are parents.

“If it gets to the stage where the advice is to close schools, this will not be for a week or two weeks, this is something that would be advised to last throughout the peak of this infection, and that is potentially until the summer period,” she said.