Charles tells wildlife filmmaker to ‘keep up the good work’ 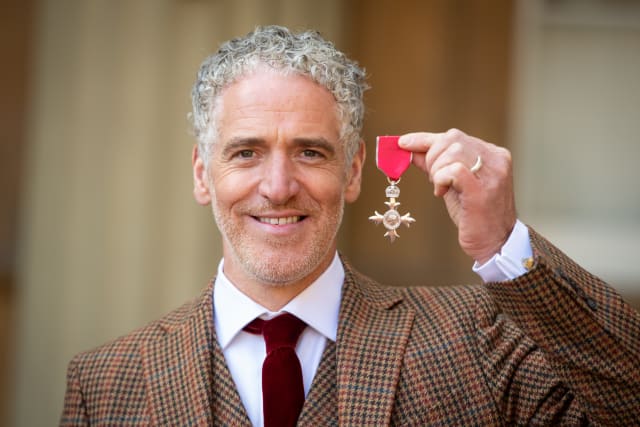 Filmmaker Gordon Buchanan was told to “keep up the good work” by the Prince of Wales as he picked up an MBE for services to conservation and wildlife filmmaking.

The Scottish presenter said it was “surreal” to be honoured at the Buckingham Palace ceremony on Thursday, after recently returning from filming cheetahs in South Africa.

He said he was hoping Charles, a vocal champion for the protection of wildlife and acting on climate change, would be the member of the royal family to present him with the honour.

“I was really hoping it would be Prince Charles,” Buchanan told the PA news agency.

“He was apologising for interrupting my schedule of filming, but I have just got back from South Africa filming cheetahs and then I’m heading to Australia on Sunday to film bats, so it fitted in perfectly.

“But he said keep up the good work, because there’s a lot that needs to be done to protect the natural world.”

Buchanan hosts BBC’s Into the Wild, where he explores UK wildlife with household names, while his other credits include the Big Cat Diary series, Springwatch and Autumnwatch

He is also patron of Trees for Life, a conservation charity working with landowners to restore the Caledonian Forest, and an ambassador for the Scottish Wildlife Trust.

After collecting his honours, Buchanan praised the younger generation for their action on climate change and conservation.

“More is being done now than ever before and I suppose I get to see firsthand on the front line conservation works,” he said.

“There (are) negative things but there’s also a huge amount of work that’s being done around the world.

“I think with the new shift generations, young people are growing up with that knowledge of the vulnerability and fragility of the natural world.

“And in another sort of 10 years that younger generation will be the people making decisions in governments, businesses and policies.

“And sadly if you grow up in that fear, I guess the biggest fear for young people I suppose is about the climate, hopefully they’re the generation that can turn things round.”

Buchanan is now due to head to Australia, for a project tracking bats, which involves attaching a small £30,000 camera to the mammals in order to follow them at nighttime.

On where he hopes to travel to next, he said: “I’ve been to every continent but for Antarctica.

“So I think Antarctica is the one place that I still want to get to.”