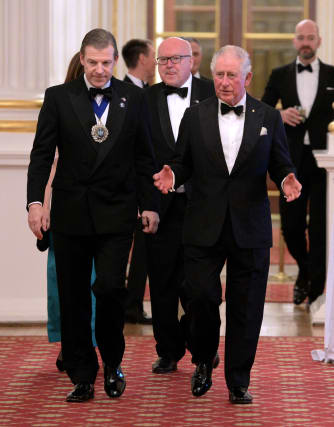 The Prince of Wales has expressed his sympathy for those who suffered through the recent Australian bushfires, saying their ordeal must have seemed “like an apocalyptic vision of hell”.

Charles was speaking at a fundraising dinner at Mansion House, in the City of London, where more than £130,000 was donated to the Australian Red Cross.

George Brandis, the High Commissioner for Australia, told the audience that Charles had previously made “a substantial private donation” to a major Australian charity which is helping the victims.

The Australian Red Cross has been helping people whose lives and homes were devastated by the massive fires that broke out in late 2019 and burned into the new year.

Charles described the fundraising evening as a chance for him to restate “just how much my family and I care about what I can only imagine must have seemed like an apocalyptic vision of hell that the Australian people have been through over these past, desperately trying, few months.”

Australian host of Channel 4’s The Last Leg, Adam Hills, acted as compere and the 200 guests were largely from City firms, Australian businesses and trade bodies.

More than 30 people have died in Australia, and thousands of animals perished as more than 10 million acres of land burned.

Charles said: “Amidst the horror and the sorrow, I have, above all, felt the greatest possible sense of admiration for the extraordinary determination and resilience of the Australian people.

“The manner in which firefighters and other emergency services, as well as countless thousands of volunteers, in their own unique, Antipodean way, have risked their lives to defend neighbour and stranger alike, represents, it seems to me, the very essence of the Australian character.”

He said: “At times we saw that enduring spirit of Aussie ‘mateship’ tested by exhaustion, by the greatest pressure and by the gravest danger.

“It is not surprising that the firies’ (firefighters) helmet now stands alongside the diggers’ (a nickname for Australian soldiers) slouch hat as a powerful symbol of the courage, resilience and generosity for which Australians are renowned.

“At the very worst of times, we saw the very best of Australia – and knowing the Aussies, as I do after 54 years, (since Charles first visited the country) that makes me very proud.”

Australia has been fighting an unprecedented bushfire season, both in terms of its scale and the damage caused, fuelled by record-breaking temperatures and months of severe drought.

Charles noted that a “truly alarming” temperature of 48.9C had been recorded on the Sydney suburb of Penrith in January and that “longer, hotter and drier summers are the new reality”.

He feared that Australians may continue “to be tested in an unprecedented way.”

The Red Cross Bushfire Appeal is among several charities which will get donations from the evening. The dinner was hosted by William Russell, the Lord Mayor of the City of London, and Mr Brandis.

Mr Russell said: “The UK and Australia have always been great friends, and I am proud that these proceeds will contribute to their efforts to support affected communities.”

Mr Brandis said: “The generosity of the people and government of the United Kingdom, throughout this fire season, has been deeply moving.

“In word and in deed, Britain has stood by Australia’s side. This dinner is testament to that, and we Australians are deeply grateful for your support.”