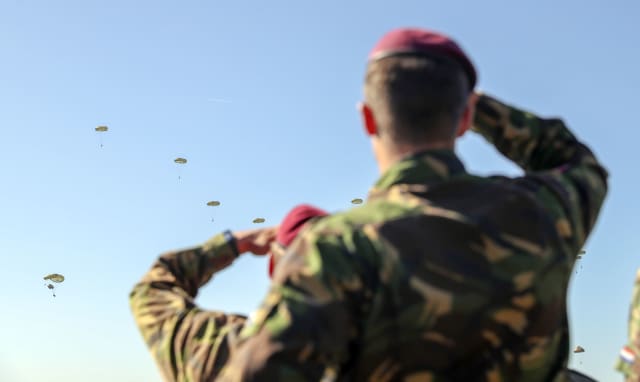 A member of the British military has been killed alongside two Americans following a rocket attack on Taji air base in Iraq, the Ministry of Defence (MoD) has confirmed.

In a statement released early on Thursday morning, the MoD said the deceased was a member of the Royal Army Medical Corps.

“The service person’s family have been informed and have requested a period of privacy before further details are released,” the statement said.

“Our thoughts and sympathies are with the family and friends at this sad time.”

“The men and women of the UK armed forces are in Iraq to help that country establish stability and prosperity. The people that did this are not friends of Iraq.

“My thoughts are with the families of those whose loved ones have been killed or injured. We shall not forget their sacrifice and will ensure those who committed these acts face justice.”

US military spokesman Colonel Myles Caggins said 12 more people from the Combined Joint Task Force Operation Inherent Resolve were injured after more than 15 small rockets hit the base on Wednesday.

Taji air base is used as a training site for Coalition forces.

One witness told the PA news agency he heard screams of panic at the base as sirens rang out.

Ali Al Dulaimy, a 28-year-old Iraqi journalist, filmed the attack from the town of Balad to the North of Taji.

Speaking to PA in Arabic through a translation tool, he said: “I heard screams and panic at the American forces inside the camp, and they were rushing to extinguish the fires that devoured the camp.

“There were soldiers shouting and sirens. It was in an agricultural area 10km near the camp.”

He added the rockets appeared to have been fired at “precise” targets.

He said: “Our servicemen and women work tirelessly every day to uphold security and stability in the region – their presence makes us all safer.

“The Foreign Secretary has spoken to the US Secretary of State and we will continue to liaise with our international partners to fully understand the details of this abhorrent attack.”

A statement by the task force public affairs office added: “Three Coalition personnel were killed during a rocket attack on Camp Taji. The names of the personnel are withheld pending next of kin notification, in accordance with national policies.

“Approximately 12 additional personnel were wounded during the attack. The attack is under investigation by the Coalition and Iraqi Security Forces. Camp Taji is an Iraqi base that hosts Coalition personnel for training and advising missions.

It led to protests at the US embassy in Baghdad which was followed on January 3 by a US airstrike that killed Iran’s most powerful military officer, General Qassem Soleimani, and Abu Mahdi al-Muhandis, a leader of the Iran-backed militias in Iraq, of which Kataib Hezbollah is a member.