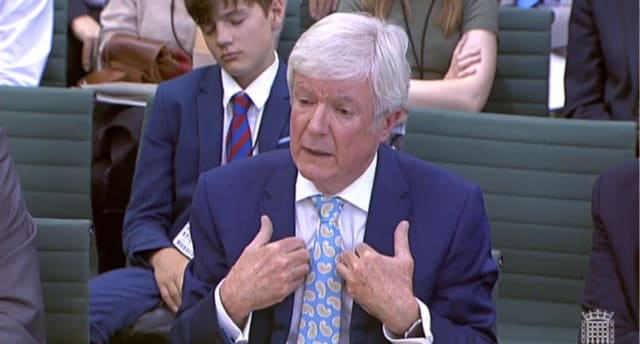 BBC boss Lord Hall has admitted it is “conceivable” that 90-year-olds could end-up in court for non-payment of the licence fee but we “absolutely don’t want” that.

The BBC director-general was quizzed by MPs at an uncertain time for the broadcaster, and said that there could be a “paring back of services” if it is hit by coronavirus.

The Government has mooted the possible end of the licence fee, with a threat to turn the BBC into a subscription service, while the universal free TV licence for over-75s ends this year.

Lord Hall was asked if he “was really prepared to take 80- or 90-year-olds to court” for non-payment of the licence fee.

“We have got a special team to make sure our communications with the over-75s is sensitive and we’ll do absolutely everything we can to make sure they understand what they need to do,” Lord Hall told the Digital, Culture, Media and Sport (DCMS) Committee.

“I don’t want to see people going to court, of course I don’t.

“The distress caused to these old people… You’d be in the bizarre position of sending out your news teams to cover 90-year-olds potentially up in court for non-payment of the TV licence because of a system you, Lord Hall, signed up for.”

Clare Sumner, director of policy at the BBC, told MPs: “It’s highly unlikely,” adding: “We are doing everything to help support people to pay.”

The current scheme in which all over-75s receive free TV licences will be restricted to those who claim pension credit from June this year.

Lord Hall said it was the BBC’s priority is to keep “our services going” if it is hit by coronavirus.

Asked if there could be a “paring back of services” if the broadcaster suffered cases of the virus, he said: “There could be. I hope there won’t be, but you could imagine a local station or some other part of our network of news operations being out of action for a period.

“We are working through how we can cope with that,” he said, adding it was the broadcaster’s priority to deliver information to the public.

He added: “We are intent on keeping absolutely everything open, all our networks going. We’re not planning on anything apart from keeping everything going.”

The BBC director-general is preparing to step down after seven years in the role.

The director-general was repeatedly asked by committee chair Julian Knight if the BBC is “too woke”.

He replied: “I believe that we should be diverse in all that it means.”

Lord Hall said he hopes Victoria Derbyshire’s BBC Two programme, which is set for the axe as part of news cuts, finds “a home on the BBC News channel.”

He said that “management will take its fair hit” in future news savings.

Posting on Twitter, presenter Derbyshire hit back at the claim that the programme was watched mainly by old men, saying it “completely ignores” online viewing.

Lord Hall also told MPs that the BBC was “diverting resources into programmes for younger audiences” and said BBC3, which moved online when the linear channel was axed, could end up with more resources.

Asked if he takes personal responsibility for the “state of the BBC right now”, he said “of course I do” but added that “creatively, the organisation is on fire”.

The BBC chairman and the chairman of the DCMS committee clashed over the issue of appointing the corporation’s new director-general after the deadline for submissions closed on Wednesday.

Mr Knight asked if there could be a “pre-appointment hearing” for Lord Hall’s successor.

Sir David said it would be inappropriate, asking if his request was “to influence the decision”, and responding that “the BBC must act in a completely independent fashion, so I think probably any political influence on this would be incorrect”.

Mr Knight said that the committee was “not asking for a right of veto. We want a pre-appointment hearing”.

Asked about gender pay, Lord Hall said the BBC still had 11 gender pay tribunals and that “most of the cases we dealt with are sorting out historical anomalies”.

The Government is consulting on proposals to decriminalise non-payment of the licence fee.