Teenager said he was watching DVDs on night of Pc’s killing, court told 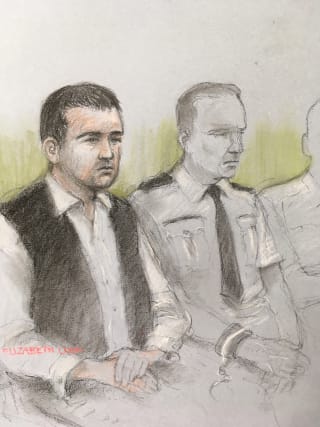 A teenager accused of murdering a police officer who was dragged behind a car, claimed he had been watching films including Fast And Furious at the time of the killing.

Henry Long, 18, from Mortimer, Reading, told police he had been in a caravan with his aunt, uncle and cousins, and had spent the evening watching DVDs, on August 15 last year.

In fact he was the driver of a Seat Toledo that had dragged Pc Andrew Harper for more than a mile along country lanes near the village of Sulhamstead in Berkshire.

The 28-year-old constable died from catastrophic injuries, after he became entangled in a crane strap attached to the boot hinge of the Seat and was pulled along.

One witness, who mistakenly thought he had seen a bloodied deer being dragged along, described him being  thrown around “like a rag doll”.

Jurors at the Old Bailey heard that when Long was arrested in the early hours of August 16, he told police: “Look at me. Do I look like a murderer?”

During police interview, his solicitor read out a prepared statement that said he had been at the Four Houses Corner caravan site  in Ufton Nervet near Reading, with his aunt, uncle and cousins, all evening, from 8.30pm.

He said: “We watched DVDs. One was Goonies, Fast And Furious. I went (to) bed I think around 10.30pm. Police woke me up. I had been outside just for a cigarette but otherwise had not left.”

Later, on September 18, when Long was charged with murder and conspiracy to steal, he said: “I don’t give a f*** about any of this.”

Long and two 17-year-olds, who cannot be named for legal reasons, all deny murdering the Thames Valley Police officer in August last year.

They all admit conspiring to steal a quad bike, and Long has admitted the manslaughter of Pc Harper, which the younger boys deny.

Earlier the court heard that Pc Harper would have been left “deeply unconscious” when he first hit his head on the ground.

His crew mate, Pc Andrew Shaw, saw him fall “as if pulled at speed whilst water skiing”, the Old Bailey heard.

Jurors were told that consultant forensic pathologist Dr Ashley Fegan-Earl believed Pc Harper would have been rendered deeply unconscious as soon as he hit the ground.

Prosecutor Brian Altman QC told the court: “In his opinion, Pc Harper’s lower legs became entangled in a rope attached to the Seat car, causing him to fall violently to the ground in an unprotected manner, sustaining a head injury which would likely have resulted in deep unconsciousness.”

Several members of the officer’s family attended court on Wednesday, as the opening of the prosecution case continued.

His father left court as details from the post mortem examination were read to the court, listing the injuries that he had suffered.

Prosecutors claim that it would have been obvious that the car was dragging something along the road, and allege that Long was driving at speed and swerving to try to dislodge it.

A reconstruction using the Seat and a mannequin was carried out by Simon Hall, a senior consultant in the investigations group of the Transport Research Laboratory, at 11.30pm on September 4.

He first did a test run with three colleagues in the Seat, pulling a mannequin of the same weight of Pc Harper behind, then swerving to follow the pattern thought to have been followed by Long on August 15.

Mr Altman told the jury: “It was his opinion that anyone driving the Seat could not fail to be aware that something of significant weight was being dragged behind the vehicle.

“The drag effect on both the steering and the handling of the car and, most significantly, the noise of the mannequin being dragged along the road, meant that its presence behind the vehicle was clear and obvious.”

Prosecutors claim that Long drove in a way to deliberately try to dislodge whatever was being dragged by the car.

Mr Altman told the jury: “It was his (Mr Hall’s) opinion that the Seat was, at times, being steered vigorously from side to side in an attempt to dislodge, as he put it, “whatever the driver perceived was being dragged by the car”.