Sunak turns on the spending taps in response to coronavirus outbreak 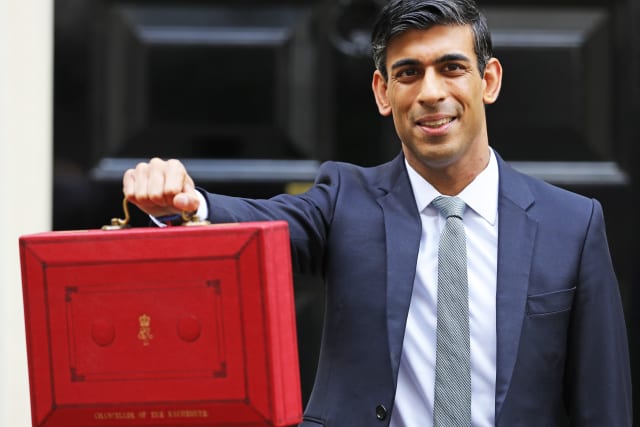 A £30 billion package to stimulate the economy in the face of the coronavirus crisis was announced by Chancellor Rishi Sunak as growth forecasts were slashed and the Bank of England announced an emergency cut in interest rates.

In a Budget which was hastily rewritten in response to the Covid-19 outbreak, Mr Sunak acknowledged the “challenging times” faced by the economy.

After less than a month in office, Mr Sunak delivered a Budget statement which acknowledged the British people were worried about the threat posed by the virus “but they are not daunted”.

Mr Sunak said there was “likely to be a temporary disruption” to the economy but insisted his plans would bring “stability and security”.

The scale of the challenge facing the economy was underlined by the Office for Budget Responsibility (OBR) in forecasts prepared before the full impact of the virus could be known.

The 2020 forecast is dramatically lower than the OBR’s previous estimate of 1.4% and marks the weakest expansion since the 2009 recession.

In response to the virus, Mr Sunak turned on the spending taps, with funding for public services, citizens and businesses which are set to suffer as the outbreak becomes more widespread and restrictions on activities are imposed.

Mr Sunak said: “Taken together, the extraordinary measures I have set out today represent £7 billion to support the self-employed, businesses and vulnerable people.

“To support the NHS and other public services, I am also setting aside a £5 billion emergency response fund – and will go further if necessary.”

Other plans represented another £18 billion of “additional fiscal loosening” and “that means I am announcing today, in total, a £30 billion fiscal stimulus to support British people, British jobs and British businesses through this moment”.

– A £1 billion business rates holiday in the coming year for retail, leisure and hospitality firms with a rateable value of under £51,000

– The Government will fully meet the cost of providing statutory sick pay for up to 14 days for workers in firms with up to 250 employees,  providing over £2 billion for up to two million businesses.

– Reforms to the benefits system to make it easier to access funds will provide a £500 million boost to the welfare system, along with a £500 million hardship fund

– A freeze on alcohol duty and a £5,000 business rates discount for pubs

– £6 billion of new funding for the NHS

– £1.4 billion in investment for the science institute at Weybridge where samples of coronavirus are being analysed

Hours before the Budget, the Bank of England set the scene with an emergency interest rate cut from 0.75% to 0.25% and a series of other measures designed to help businesses and households through a coronavirus economic shock “that could prove sharp and large, but should be temporary”.

Mr Sunak said: “I know how worried people are. Worried about their health, the health of their loved ones, their jobs, their income, their businesses, their financial security.

“And I know they get even more worried when they turn on their TVs and hear talk of markets collapsing and recessions coming. People want to know what’s happening, and what can be done to fix it.

“What everyone needs to know is that we are doing everything we can to keep this country, and our people, healthy and financially secure.”

He added: “We will get through this – together. The British people may be worried, but they are not daunted.

“We will protect our country and our people. We will rise to this challenge.”

Despite speculation that he would ditch the framework on spending set by predecessor Sajid Javid, Mr Sunak said that his Budget is delivered “not just within the fiscal rules of the manifesto but with room to spare”.

He also announced that fuel duty would be frozen for another year in response to pressure from Tory MPs.

Ahead of the spending review later this year, Mr Sunak said the OBR had declared the Budget represented “the latest sustained fiscal boost for 30 years”.

By the end of the Parliament in 2024 day-to-day spending on public services will be £100 billion higher in cash terms than it is today, he said.

The entrepreneurs’ relief tax break will be scaled back, saving £6 billion over the next five years.

But Mr Sunak said “most of that money” will go back to firms through a series of other measures: increasing the tax break for research and development expenditure, the structures and building allowance and increasing the employment allowance by a third to £4,000.

The Chancellor also confirmed plans to abolish the “red diesel” tax relief for most sectors although farmers will continue to benefit.

Mr Sunak said from December 1 VAT on digital publications would be abolished, ending the “reading tax”.

The Chancellor promised £27 billion in road improvements, “the biggest ever investment in strategic roads and motorways”.

Investment in research and development would be increased to £22 billion and £800 million for a new “blue-skies funding agency” modelled on the Arpa programme in the US, a scheme championed by Boris Johnson’s aide Dominic Cummings.

Responding to the Budget statement, Labour leader Jeremy Corbyn welcomed the steps being taken to reduce the economic impact from coronavirus but said said the UK was going into the crisis with public services “on their knees” and an economy that was “flat-lining”.

He said: “Today’s Budget was billed as a turning point, a chance to deliver, in particular on the promises made to working-class communities during the general election. But it doesn’t come close.

“The Government’s boast of the biggest investment since the 1950s is frankly a sleight of hand. It’s in fact only the biggest since they began their slash and burn assault on our services, economic infrastructure and living standards in 2010.

“Having ruthlessly forced down the living standards and life chances of millions of our people for a decade, the talk of levelling up is a cruel joke.

“The reality is that this is a Budget which has an admission of failure – an admission that austerity has been a failed experiment. It didn’t solve our economic problems, but made them worse, that held back our own recovery and failed even in its own terms.”

Mr Corbyn added: “Today’s measures go nowhere near reversing the damage that has been done to our country.”