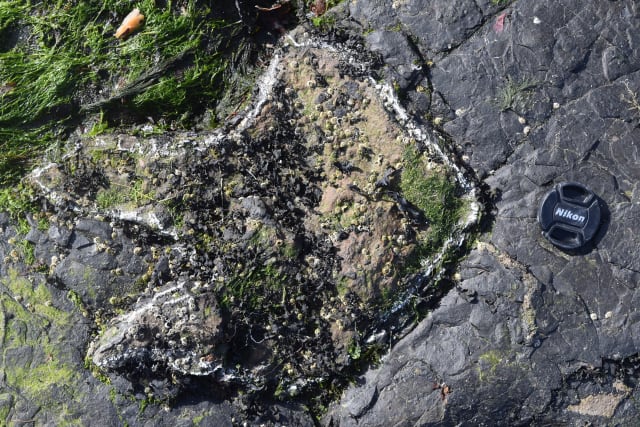 Palaeontologists have discovered signs stegosaurs once roamed on Skye.

Previously undiscovered dinosaur tracks on the north-east coast of the island were revealed after the spring storms of 2017 moved boulders along the beach.

A team of palaeontologists from the University of Edinburgh discovered a short sequence of distinctive, oval footprints left by a stegosaur, a member of the subgroup of plate-backed dinosaurs that includes the late Jurassic stegosaurus.

Analysis of around 50 newly identified footprints confirmed stegosaurs, known for their distinctive diamond-shaped back plates, roamed there around 170 million year ago when the site was a mudflat on the edge of a shallow lagoon.

The discovery means the site at Brothers’ Point, called Rubha nam Brathairean in Gaelic, is now recognised as one of the oldest-known fossil records of this major dinosaur group found anywhere in the world, the university said.

Paige dePolo, a PhD student at the University of Edinburgh’s School of GeoSciences, who led the study, said: “These new track sites help us get a better sense of the variety of dinosaurs that lived near the coast of Skye during the middle Jurassic than what we can glean from the island’s body fossil record.

“In particular, deltapodus tracks give good evidence that stegosaurs lived on Skye at this time.”

Skye is known as one of the few places in the world where fossils from the middle Jurassic period can be found.

Discoveries on the island have provided scientists with vital clues about the early evolution of major dinosaur groups, including huge, long-necked sauropods and fierce, meat-eating cousins of Tyrannosaurus rex.

Dr Steve Brusatte, also of the School of GeoSciences, who was involved in the study and led the field team, said: “Our findings give us a much clearer picture of the dinosaurs that lived in Scotland 170 million years ago.

“We knew there were giant long-necked sauropods and Jeep-sized carnivores but we can now add plate-backed stegosaurs to that roster and maybe even primitive cousins of the duck-billed dinosaurs, too.

“These discoveries are making Skye one of the best places in the world for understanding dinosaur evolution in the middle Jurassic.”

The study, published in the journal PLOS ONE, was supported by a grant from the National Geographic Society.

It also involved scientists from National Museums Scotland, University of Glasgow, Federal University of Rio de Janeiro, and the Staffin Museum on Skye.