Queen back to shaking hands at royal audience 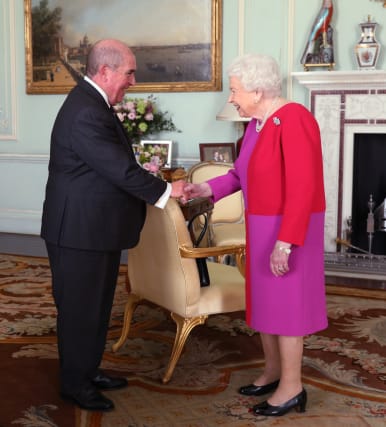 The Queen went back to shaking hands again at a Buckingham Palace audience.

The monarch avoided her traditional greeting when welcoming the Sri Lankan High Commissioner to her residence on Tuesday.

But on Wednesday, she met with Professor Mark Compton, Lord Prior of the Order of St John, and was pictured shaking his hand without gloves.

The Queen turns 94 next month, and the risk of more severe symptoms from the Covid-19 illness is greater for the elderly and those with pre-existing health conditions.

England’s chief medical officer, Professor Chris Whitty, has said the death rate for people infected with coronavirus is “significantly ramped up” among those over the age of 80.

The Queen, dressed in a striking magenta and red dress, smiled broadly as greeted the professor in her customary way for an audience.

On Tuesday, the monarch met Sri Lankan High Commissioner Saroja Sirisena and her husband, Dr Sudath Talpahewa, in the 1844 room at her royal residence.

Ms Sirisena handed over her credentials, which the Queen received, and Dr Talpahewa bowed to the head of state from a distance as he was introduced.

Prime Minister Boris Johnson was told not to shake hands with dignitaries including the Queen at the Commonwealth Day service at Westminster Abbey on Monday over coronavirus fears.

Mr Johnson said the move sent a “subliminal cue” about the importance of hygiene.

Guests at the Commonwealth Service, the last appearance by the Duke and Duchess of Sussex as senior royals, adopted a range of greetings to get around the handshake ban.

The Prince of Wales opted for a namaste, while Harry bumped elbows with musician Craig David, and Meghan decided to hug the 7 Days singer.

The Queen and other senior royals were following the protocol the Abbey has been operating under during the past few weeks.

On March 3, the Queen opted to wear long white gloves as she carried out an investiture at Buckingham Palace.

It was believed to have been the first time the monarch had done so at a palace investiture.

The Order of St John, the origins of which date back to a hospice in Jerusalem in 1070, started providing first aid in England in 1877 by setting up St John Ambulance.

It now delivers first aid, healthcare and support services around the world, including at the Queen’s palace garden parties.

The head of state, who is the Sovereign Head of the Most Venerable Order of the Hospital of St John of Jerusalem, was presented with the Order’s first ever Service Medal in Gold.