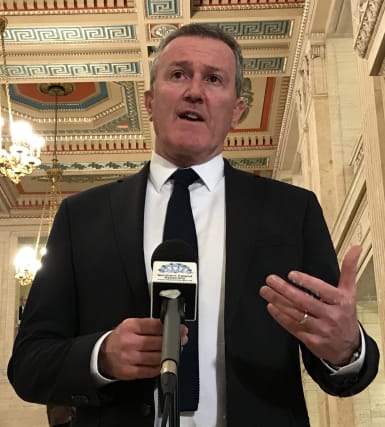 Stormont had sought an extra £1.4 billion to relieve pressure on the health service and increase the pay of nurses and teachers. Ministers also want to compensate victims of historical institutional abuse and mitigate the effect of welfare reform on the vulnerable.

Northern Ireland’s allocation is expected to be £523 million short of the £1.4 billion sought by departments which make up the devolved administration for day-to-day spending.

The country’s detailed budget is expected to be set at Stormont towards the end of this month for the next financial year.

“Before this Budget was announced the gap between inescapable pressures identified by departments and the budget available to us was nearly £600 million.

“We are also dealing with the emerging challenges of coronavirus which will have a profound impact on people and the economy.”

It is too early to say whether Northern Ireland will follow England’s lead and give small businesses a rates holiday.

Mr Murphy said: “With finite resources and infinite demands, myself and ministerial colleagues will take a collective approach to prioritisation, making the best possible use of the available resources.”

The New Decade, New Approach deal which led to restoration of devolved powersharing envisaged billions of pounds of extra spending.

It could exceed £9 billion over a lengthy but time-bound period.

Mr Murphy said: “Over recent months I have been engaging with Treasury and making the case for the funding committed under the New Decade, New Approach document and for the reinstatement of outstanding confidence and supply money.

“If the British Government is serious about ending austerity then this summer’s spending review must release further funding to devolved administrations.”

She said: “No reference was made to recent calls for the suspension of Air Passenger Duty, which could prove vital for securing Northern Ireland’s connectivity with other major cities.

“And on Brexit, there was also no indication of measures to help businesses here prepare for the Northern Ireland protocol.

“It is now vital that local firms are supported in the forthcoming Northern Ireland Budget.”

Federation of Small Businesses NI policy chairwoman Tina McKenzie said the range of measures to support SMEs over coronavirus will bring some relief to firms in a difficult period.

“We are already seeing businesses impacted by reduced footfall and supply chain issues, so it is vital they get all the support possible.

“Focus now turns to Stormont, where the restored executive must now rise to the challenge to support small businesses when they need it most.”