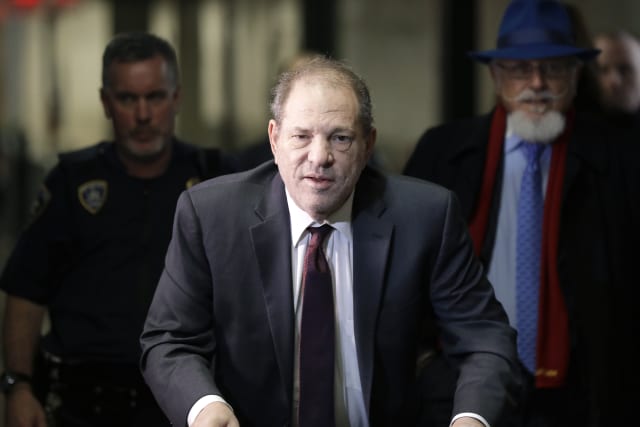 One of the actresses who accused Harvey Weinstein of sexual harassment has said she “cried tears of amazement” when he was sentenced to 23 years in prison.

The Hollywood mogul, who has been accused of violating scores of women, was convicted last month for assaulting a production assistant at his apartment in 2006, and third-degree rape of another woman in 2013.

Weinstein was sentenced by Judge James Burke at the Manhattan Supreme Court in New York on Wednesday.

Mira Sorvino, who previously made allegations against Weinstein, tweeted: “23 years. Harvey Weinstein has been sentenced to 23 years in prison for his crimes of rape and sexual assault.

“I literally cried tears of amazement, gratitude that the justice system has worked on behalf of all of his victims today.”

The American actress is among the many women who have accused the disgraced film producer of sexual misconduct, along with the likes of Rose McGowan, Ashley Judd, Gwyneth Paltrow, Angelina Jolie and Jennifer Lawrence.

Rosanna Arquette, another of his high-profile accusers, told of her “gratitude to all the silence breakers”, including McGowan, “and all the survivors of weinstein” and the “brave women who testified”.

She also hailed the “incredible investigative reporting of Ronan Farrow” and other journalists.

Farrow, the son of actress Mia Farrow and filmmaker Woody Allen, was one of the first journalists to report on allegations against Weinstein, in 2017.

The sentencing of Weinstein, 67, has also been praised as a “major moment for the silence-breakers and for women battling everywhere for their right to work in a safe workplace without fear of abuse and harassment” by Time’s Up UK, part of the global movement against sexual harassment.

Time’s Up UK’s chairwoman, Dame Heather Rabbatts, said in a statement: “For us at Time’s Up UK the courage of the silence breakers inspires our work as we focus on how the culture has to change to ensure no-one has to say #MeToo again.

“What this trial shows us is that there is no greater power than a group of women who know their rights.

“When we work together, we can effect change, change that will shift the power balance and support and give hope to women for years to come.”

Actress Jameela Jamil tweeted her congratulations to “the incredible women who took this monster on, in spite of how maliciously he retaliated”.

The British star added: “You have made a huge leap forward for all women with this victory. Also so much love to @RonanFarrow.”

Fieldfisher’s Jill Greenfield, who is running the UK civil litigation against Weinstein, said that his sentencing is a “hugely positive step for UK victims”.

Ms Greenfield, a personal injury solicitor, added: “They provided background information to the DA before the trial, and written submissions for consideration for sentencing by Judge Burke.

“There is some satisfaction for them having had their say and in knowing that the court in New York took into account what happened to them in the UK.

“Now Weinstein is locked up, it must be time to question the enablers around him, who allowed his abhorrent criminal behaviour to go unchecked for so long.

He claims that any sexual activity was consensual.