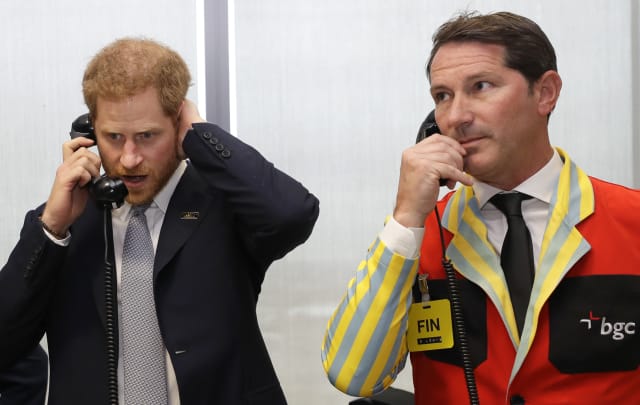 The Duke of Sussex’s prank phone call experience demonstrates the pitfalls Harry and the Duchess of Sussex will face operating outside the royal fold, a former press secretary to the Queen has warned.

Harry was duped into speaking about his decision to quit the royal family by Russian hoaxers posing as activist Greta Thunberg and her father.

Dickie Arbiter suggested the duke will have been left angry by the prank which happened after he spoke on the landline of his rented mansion on Vancouver Island, Canada.

The royal expert told the PA news agency: “As long as Harry and Meghan are over there, they’re out of the protection of the system – and for all its faults, the system does, and is there, to protect.

“If they were at Buckingham Palace, it wouldn’t have happened. They wouldn’t have got through the switchboard. They’re pretty vigilant.”

He added: “If you’re outside the system, you’re open to anything and everything. Unfortunately, he got nabbed not once, but twice.”

During the two recorded phone calls, Harry told how he was “completely separate from the majority” of his family, The Sun revealed.

He also claimed that US President Donald Trump has “blood on his hands”.

Mr Arbiter said when Canadian DJ Pierre Brassard, pretending to be Canadian prime minister Jean Chretien, was put through to the Queen in 1995, the monarch was also in Canada.

Harry and Meghan have this week carried out their final official public duty as senior royals before they quit on March 31 to pursue a new life of personal and financial freedom in North America.

Mr Arbiter suggested: “If it is Harry in the phone calls, I would think he will be feeling angry.”

But he added: “If you look at the sort of other people who have been hoaxed, he’s in pretty good company.”

Singer Sir Elton John, a friend of the duke’s, is among the celebrities who have been tricked by the same notorious pranksters.

The phone conversations, said to have been made by Vladimir Kuznetsov and Alexey Stolyarov – known as Vovan and Lexus – took place on New Year’s Eve and January 22.

Speaking about Prime Minister Boris Johnson, the duke described him as a “good man” but as someone who is set in his ways.

The jokers tricked Harry into believing he was speaking to 17-year-old climate change activist Greta and her father.

Speaking about his decision to step down as a senior royal, the duke said: “Sometimes the right decision isn’t always the easy one”, The Sun reported.

“And I think there’s a hell of a lot of people around the world that can identify and respect us for putting our family first.”

An extract from one of the recorded calls was published on YouTube along with an animated cartoon of Harry.

In the audio, a voice which is reportedly the duke’s tells hoaxers that the world is being led by “some very sick people”.

“The fossil fuel industry and certain presidents around the world are driving completely the wrong agenda,” he said.

“I think the mere fact that Donald Trump is pushing the coal industry so big in America, he has blood on his hands.”

Harry said in the recording that he was “confident” that in the next five to 10 years “things will change” with regard to the climate agenda.

According to The Sun, the duke told the prankster posing as Greta that the activist is “one of the few people” who could reach into Mr Johnson’s “soul” and get him to believe in her cause.

“But you have to understand that, because he has been around for so long, like all of these other people, they are already set in their ways,” he reportedly said.

During the call, the hoaxers joked about reading about the royals, to which Harry replied: “I can assure you, marrying a prince or princess is not all it’s made out to be.”

Asked about his uncle the Duke of York’s friendship with paedophile Jeffrey Epstein, Harry said: “I have very little to say on that.

A spokesman for Harry declined to comment on the story.

Members of the royal family have been the target of hoax callers before.

When the Queen spoke to a DJ instead of the Canadian PM, the pair chatted for around 15 minutes and he even managed to elicit a promise that she would try to influence Quebec’s referendum on proposals to break away from Canada.

In 2012, a nurse who was treating the Duchess of Cambridge while she was pregnant took her own life after being duped by hoaxers.

Jacintha Saldanha had been tricked by two Australian radio DJs who impersonated the Queen and the Prince of Wales into giving a condition update on Kate, who was suffering severe morning sickness at a private hospital.