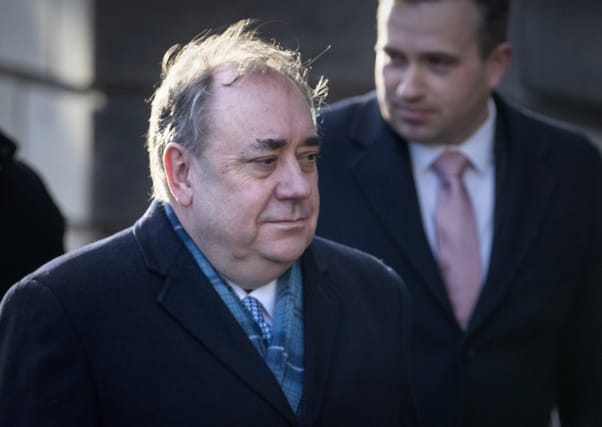 A former Scottish Government official who has accused Alex Salmond of attempted rape and sexual assault has rejected claims she fabricated the incidents.

The woman, who cannot be named for legal reasons, has spoken about two alleged incidents, including one charge that the 65-year-old tried to rape her in June 2014.

Shelagh McCall QC, representing Salmond, accused the prosecution witness on Tuesday of making up the attempted rape and said the woman had used knowledge about the former first minister’s whereabouts at the time to fabricate the account.

The lawyer also argued during cross-examination that email communication before the alleged incident was evidence that it had not occurred.

The witness, known as Woman H, said: “I wish for my life that were true but that’s not.

“I wish the (former) first minister had been nicer and a better man and I weren’t here.”

She had told the court on Monday she felt “hunted” by Salmond moments before the alleged attempted rape at Bute House.

It was heard he stripped himself naked – apart from his socks – removed most of her clothing, pushed her on the bed and assaulted her.

Ms McCall asked why the woman had not called for a security guard to help that night or left the premises sooner.

Woman H said: “I wish that I stood up and decked him but I didn’t, I wish I had run but I didn’t – I was in panic.

“I wish I had. Our job was to protect him as well, I didn’t fully understand what was happening to me.

“He was often aggressive, often bullying – now forcefully trying it on with me for what felt like a very long period.

“I had wanted to deal with it privately – because the whole thing was horrible – as we often did with Alex’s behaviour.

“I just absolutely froze. I was screaming on the inside but not on the outside.”

The other sexual assault allegation in relation to Woman H is said to have taken place at Bute House in May 2014 after a meal there.

But Ms McCall said diary accounts for Bute House showed there was not an occasion the witness could have been at the first minister’s official residence for dinner in May 2014.

The jury also heard her client had not been at the residence on the evening of 20 dates that month.

Woman H rejected the claim, saying just because she was not there for a dinner did not mean she had not been at the property.

Ms McCall QC had earlier asked whether the woman had been encouraged by others to speak to Police Scotland after reports emerged in August 2018 that Salmond was being investigated.

The court heard the woman had been in contact with a number of people before talking to police.

It was also heard the witness had been in contact with someone in 2015 about a personal political project in which she said she would work with Salmond again, around a year after the alleged sexual assaults were said to have taken place.

Ms McCall asked whether the witness was “angry” with her client for not helping but this was denied.

The witness earlier told the court she began to suffer flashbacks after the Harvey Weinstein scandal emerged.

The trial, before judge Lady Dorrian, continues on Wednesday.