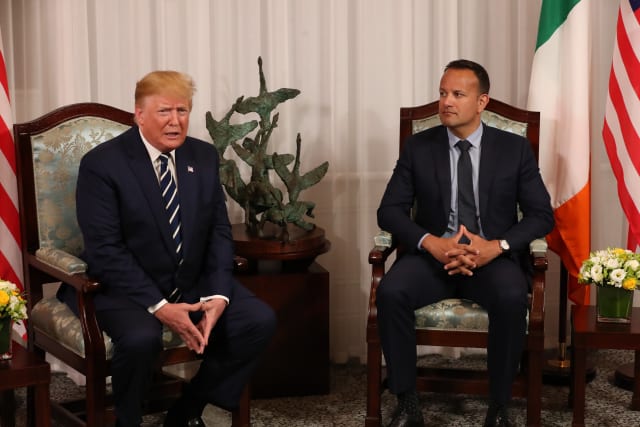 Irish Premier Leo Varadkar will seek to get an update from President Donald Trump on the situation facing the undocumented Irish in America while on his St Patrick’s Day visit to Washington.

Mr Varadkar will commence his US St Patrick’s Day trip in Washington DC on Wednesday.

Speaking ahead of the trip, he said he will use his meetings with President Trump and other senior US politicians “to emphasise the strength and importance of Irish-US bilateral relations, particularly our economic ties”.

He added: “I intend to discuss issues including EU-UK relations, Northern Ireland and the US role in protecting the Good Friday Agreement.”

A bill which could give Irish citizens access to thousands of US visas every year was passed by the US House of Representatives on Monday.

The plan to add to the E-3 visa programme will now be voted on by the US Senate.

Mr Varadkar said: “There was positive news this week in relation to the legislation to expand the E3 Visa programme, and I look forward to getting an update on how we can resolve the situation facing the undocumented Irish in America.

“This is a relationship that cannot be taken for granted and I intend to use my visit to Washington DC to deepen these ties, while also promoting EU-US relations.”

President Trump will not be attending the lunch, which is being hosted by the House Speaker Nancy Pelosi.

Mr Trump has blamed his non-attendance at the lunch on Ms Pelosi, pointing to the impeachment inquiry launched by the Democrat-led House last year.

Later on Thursday afternoon, Mr Varadkar will join Mr Trump and his wife Melania for the traditional Shamrock Ceremony at the White House, and will attend the Ambassador’s St Patrick’s Day Reception that evening.

On Thursday morning, he will be hosted for breakfast by Vice President Mike Pence.

Last year, Mr Varadkar, who is gay, was praised for speaking about being judged by his political actions and not his sexual orientation when he spoke at the event with Mr Pence.

Mr Pence has been criticised for his views on LGBT rights.

Mrs Foster said on Tuesday they had decided “not to travel to Washington for the St Patrick’s Day receptions”.

She said: “Whilst it is an enormous opportunity to showcase Northern Ireland in DC, our priority is dealing with the spread of coronavirus.”

Mrs Foster and Ms O’Neill will attend a Cobra meeting in London on Wednesday to discuss the response of UK authorities to Covid-19.

As of Tuesday night, there are 16 cases in Northern Ireland and a total of 34 cases in the Republic of Ireland.

On Tuesday, President Trump said Americans should remain calm in the face of fear about the spread of coronavirus in the US.