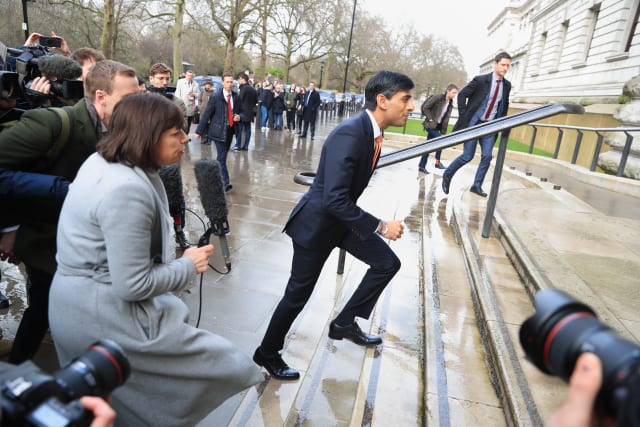 Rishi Sunak faces one of the sternest tests of his short Cabinet career when he delivers his first Budget as Chancellor.

Budgets can prove dicey affairs, as his successors – who had been in the job far longer than Mr Sunak’s month-long tenure – have been quick to find out.

George Osborne was forced to U-turn over his so-called “pasty tax” in 2012 in order to quell a backbench rebellion, while Philip Hammond scrapped plans to increase self-employed National Insurance contributions after being accused of breaking a manifesto pledge.

But Mr Sunak, whatever he announces in his speech in the House of Commons on Wednesday, will have gone one better than his predecessor Sajid Javid, who became the first chancellor in 50 years to fail to give a Budget.

Mr Sunak accepted the job at Number 11 Downing Street after Mr Javid quit, stating that “no self-respecting minister” could accept the Prime Minister’s fresh terms, which involved sacking his advisers and replacing them with officials chosen by Boris Johnson’s team.

Promoted up the chain last month from his role as chief secretary to the Treasury, Mr Sunak will have to navigate choppy waters during his first Budget.

The UK economy has taken a hit following the escalating coronavirus outbreak, and global markets have been rocked by a fallout between Russia and Saudi Arabia over oil prices.

Despite his inexperience as a Cabinet minister, he received a ringing endorsement this week from his constituency predecessor William Hague, who used an article in the Telegraph to assure taxpayers that they would be “in the hands of an unusually capable politician” at the Budget.

After taking Mr Hague’s Richmond (Yorkshire) seat following the former Conservative Party leader’s decision to stand down at the 2015 general election, Mr Sunak was quick to establish himself as a free thinker in Westminster.

The Brexiteer in 2016 produced a report on the merits of introducing free ports after leaving the European Union, a tax-break concept that the Prime Minister cherry-picked for his own leadership campaign.

Mr Sunak’s decision, along with high-flying colleagues Oliver Dowden and Robert Jenrick, to jointly back Mr Johnson during the summer leadership contest was seen as a major win for the former London mayor’s campaign, proving he had the young blood of the party onside.

The PM was quick to reward Mr Sunak’s loyalty, making him chief secretary to the Treasury after entering Downing Street in July.

The level of trust placed in the Oxford University graduate was further demonstrated after Mr Javid’s sudden resignation during the PM’s first post-Brexit reshuffle of his Cabinet in February.

In accepting the job, Mr Sunak became the first Hindu to occupy the position of Chancellor.

At the age of 39, he missed out on being the youngest chancellor of the past century by just a single year – Mr Osborne was 38 when he took charge of the Treasury in 2010.

The eldest of three children and born into what he dubbed an “NHS family”, Mr Sunak’s father was a GP and his mother ran her own pharmacy.

His grandparents were born in India and emigrated to the UK from East Africa in the 1960s.

Mr Sunak cites his time working in his mother’s “tiny chemist shop” as instilling in him a business acumen and support for free enterprise.

Before entering politics, he had a successful business career, working as an analyst for investment bank Goldman Sachs before going on to work in hedge and investment fund management.

Married with two daughters, he met wife Akshata, the daughter of Indian billionaire and businessman Narayana Murthy, while studying at Stanford University in the US.