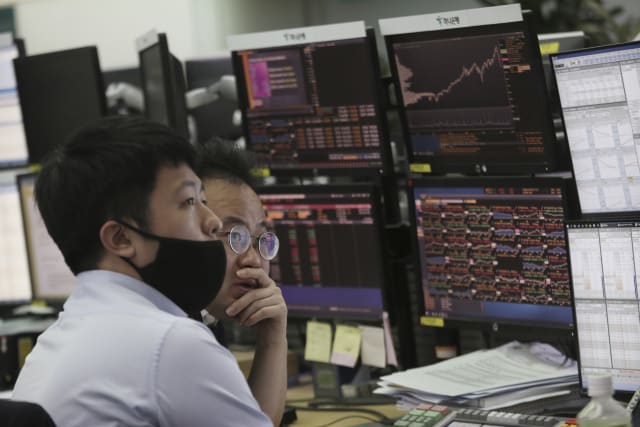 Stock markets were calmer on Tuesday following one of the biggest routs since the financial crisis and lows not seen on the London Stock Exchange since the immediate aftermath of the Brexit referendum.

The FTSE 100 was up by around 2% in early trading, as Asian markets were buoyed by calls from Japan’s prime minister Shinzo Abe for its central bank to act on the recent falls.

Coronavirus and the escalation of an oil trade war between Russia and Saudi Arabia knocked almost 8% off the leading shares index in London on what has been dubbed “Black Monday”.

It capped a two-week period of uncertainty that saw nearly 20% wiped off the value of the companies on the index.

He said overnight: “Markets are making nervous movements amid uncertainty over the global economic outlook.”

The next Governor of the Bank of England, Andrew Bailey, who starts later this month, will be under pressure to cut interest rates in the UK if markets fail to stabilise.

Neil Wilson, chief market analyst at Markets.com, said: “Investors are licking wounds and there is a stabilisation of the rout, but this looks like a short-term bounce on oversold levels, not a meaningful turn. It smells like a dead cat.

“The stimulus is coming, but the situation on the ground gets worse. It seems comments from Donald Trump, and overnight some emollient tones from the Japanese authorities, are helping.”

Leading the charge towards recovery were some of the businesses who took the hardest hits on Monday, with shares in oil majors Shell and BP gaining 6.2% and 3.8% respectively.

But having both fallen by close to 20% on Monday, both businesses have some way to returning to previous peaks.

The major issue for the market has been a decision by the Saudis to turn on the taps and cause an oversupply of oil.

This pushes the price down and – the Saudis will hope – force Russia back to the negotiating table as they start to suffer from the low prices.

Consumers could benefit from the low oil prices, with a barrel still at 33.34 dollars a barrel. It was around 45 dollars last week.

Asda has already announced it plans to cut 2p off the price of a litre of petrol and diesel, and others are expected to follow suit.

Experts believe as much as 10p could fall off the price of a litre in the UK, depending on how long the oil war continues.