I was too scared to call for help, alleged victim tells Salmond trial 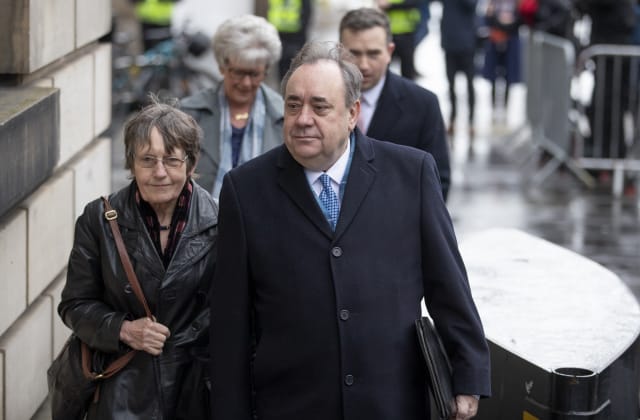 A former Scottish Government official who has accused Alex Salmond of sexual assault said she was “too scared” to call for help at Bute House.

The woman, who is the first to give evidence, has spoken about two alleged incidents, including one charge that the 65-year-old tried to rape her in June 2014.

Shelagh McCall QC, representing Salmond, asked on Tuesday why the woman had not called for a security guard to help that night.

The prosecution witness, who cannot be named for legal reasons, said: “I really wish that I had. I was scared, I was embarrassed and humiliated.

Ms McCall QC had earlier asked whether the woman had been encouraged by others to speak to Police Scotland after reports emerged in August 2018 that Salmond was being investigated.

The court heard the woman had been in contact with a number of people before talking to police.

It was also heard the witness had been in contact with someone in 2015 about a personal political project in which she said she would work with Salmond again, around a year after the alleged sexual assaults were said to take place.

Text messages apparently sent between the two were shown ​in court.

The messages were said to have been exchanged after the allegations about Salmond surfaced in newspapers and discussed the “AS stuff”.

An apparent text from Woman H to Woman J shown in court said: “I have a plan. And means we can be anonymous but see strong repercussions.”

Woman H said the repercussions were to do with the party and police taking action.

The witness earlier told the court she began to suffer flashbacks after the Harvey Weinstein scandal emerged.

The woman previously told the court on Monday that she felt “hunted” by Salmond moments before an alleged attempted rape in Bute House.