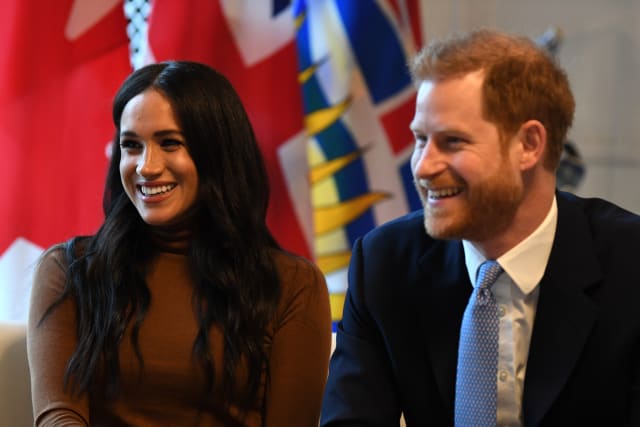 The Duke and Duchess of Sussex met young leaders of the Queen’s Commonwealth Trust (QCT) as part of their farewell tour of the UK.

Harry and Meghan, who are president and vice-president of the charity, hosted the group at Buckingham Palace last week.

The duke was caught in a moment of laughter sat on a sofa next to his beaming wife in a black and white photograph shared on the Sussex Royal Instagram page on Tuesday.

A YouTube video shows the relaxed-looking couple discussing mental health, equal opportunities and youth leadership with the group, all of whom work with QCT.

The charity aims to champion, fund and connect young leaders working to change the world.

In a video clip of the conversation, Harry says: “Without something to aim for, you can’t unlock the potential, right?”

“I bet it’s made all the difference, right, to connect all of you guys.”

Megan adds: “To build this network, the QCT, so you have a support system and a sound board to continue to bounce these ideas off of.”

The Instagram post came after Harry and Meghan’s last official appearance with the Queen, Prince of Wales, Duchess of Cornwall and Duke and Duchess of Cambridge on Monday.

The Commonwealth Service brought to a close their whirlwind UK farewell tour, where they also attended the Endeavour Fund Awards, a military musical festival at the Royal Albert Hall and Meghan’s secret visit to a school in Dagenham, east London, to celebrate International Women’s Day.

The couple have a few more weeks before they officially step down as senior royals, but as they left the event at Westminster Abbey it was the symbolic end of their life supporting the Queen.

From March 31, the monarch’s grandson and American former actress Meghan will no longer use their HRH styles as they pursue a new life of personal and financial freedom, mostly in North America.