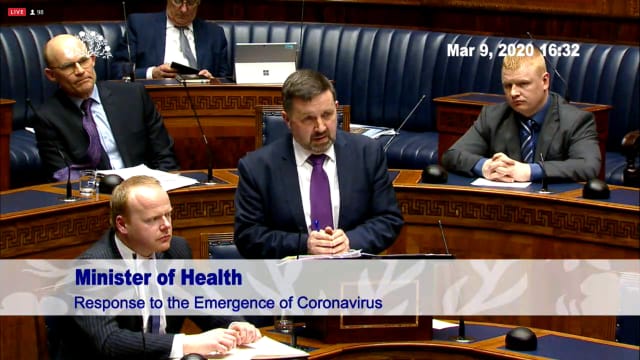 Two schools have closed to undertake deep cleaning after a young person was diagnosed with Covid-19 in Northern Ireland.

Newtownhamilton High School and primary school share the same site in Co Armagh and are expected to reopen next week.

Stormont Education Minister Peter Weir said: “We are trying to hold back a tide here.”

Between 50 and 80% of the population could ultimately be infected by the coronavirus, Stormont health minister Robin Swann said.

Northern Ireland is attempting to contain the spread of the virulent infection.

Mr Swann added: “This is not going to get any easier any time soon.

“The indications are it is likely to get much worse and more challenging before we are through the worst.”

In total, 12 positive cases have been detected in Northern Ireland.

The remaining three were traced through previously-reported cases involving recent travel to the region.

St Gall’s said: “As a precautionary measure we have made the decision to cancel all training and games this week.”

Tracing of those in contact with confirmed cases is at an advanced stage.

The health minister said: “Public Health Agency (PHA) is content that there is no public health risk to anyone attending either of the schools, however it understands as a precautionary measure both schools will be closing today to undertake an enhanced clean.”

Mr Swann said most who contracted the infection recovered and suffered mild symptoms.

He said all appropriate actions were being taken in relation to all confirmed cases.

The Ulster Unionist added: “We need to walk a fine line and be alert but not be alarmed.”

He updated the devolved Assembly at Stormont on Monday.

He said: “Whilst the situation is serious, I would like to reassure members that detailed plans are in place in the event of an outbreak spreading across the UK and the Republic of Ireland with sustained community transmission.

“Our health service is used to managing infections and we are well prepared to deal with this.”

He said: “We have got to do this in a calm, measured way to try to ensure the most accurate advice is given, that the most professional advice is given and to urge people to follow it.”

He added: “All public authorities should be considering plans for large scale public events.

“We must be driven by public health and public safety concerns. Containment now is better that a more serious crisis tomorrow.”