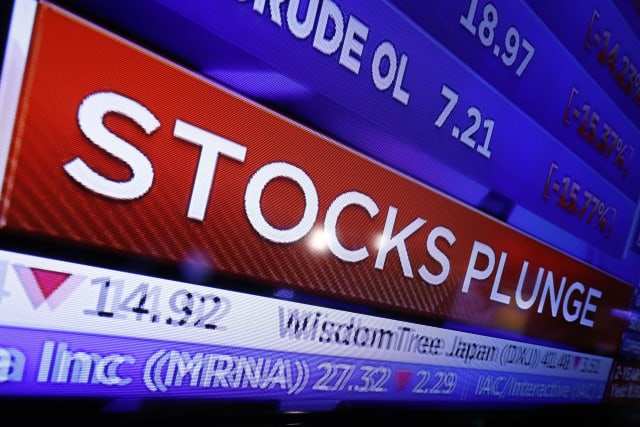 Stocks plummeted on Wall Street on a combination of Covid-19 fears and plunging oil prices, triggering a brief, automatic halt in trading to let investors catch their breath.

The price of oil sank 20% after Russia refused to roll back production in response to falling prices and Saudi Arabia signalled that it will ramp up its output.

While low oil prices can eventually translate into cheaper petrol, they are wreaking havoc on already struggling energy companies and countries that depend on oil, including the number one producer, the United States.

The war between the giant oil producers came just as Italy heads for a huge hit to its economy as it enforces a lockdown on 16 million people in the northern part of the country, the heart of its manufacturing and financial industries.

The turmoil is expected to push Italy into recession and weigh on the European economy.

The carnage in stock and bond trading was nearly as breathtaking as in oil markets.

In the United States, the S&P 500 plunged as much as 7.4% in the first few minutes of trading, and losses were so sharp that trading was temporarily halted.

Stocks trimmed their losses following the halt, and the index was down 6%, as of 11.12am Eastern time.

The carnage in the energy sector was particularly arresting.

Exxon Mobil and Chevron were on track for their worst days since 2008.

Treasury yields careened to more record lows as investors dove into anything that seems safe, even if it pays closer to nothing each day.

Traders are increasing bets that the Federal Reserve will cut interest rates back to zero to do what it can to help the virus-weakened economy, perhaps as soon as next week.

All the drops are the result of fear of the unknown.

As Covid-19 spreads around the world, many investors feel helpless in trying to estimate how much it will hurt the economy and corporate profits, and the easiest response to such uncertainty may be to get out.

After initially taking an optimistic view on the virus, hoping that it would remain mostly in China and cause just a short-term disruption, investors are realising they likely woefully underestimated it.

The virus has infected more than 110,000 worldwide, and Italy on Sunday followed China’s lead in quarantining a big swathe of its country in hopes of corralling the spread.

That sparked more fears, as quarantines would snarl supply chains for companies even more than they already have.

US President Donald Trump played down the drop in the markets.

He tweeted: “Saudi Arabia and Russia are arguing over the price and flow of oil. That, and the Fake News, is the reason for the market drop!”

In another tweet he said: “Good for the consumer, gasoline prices coming down!”