Sturgeon: No plans to close schools despite rise in coronavirus cases 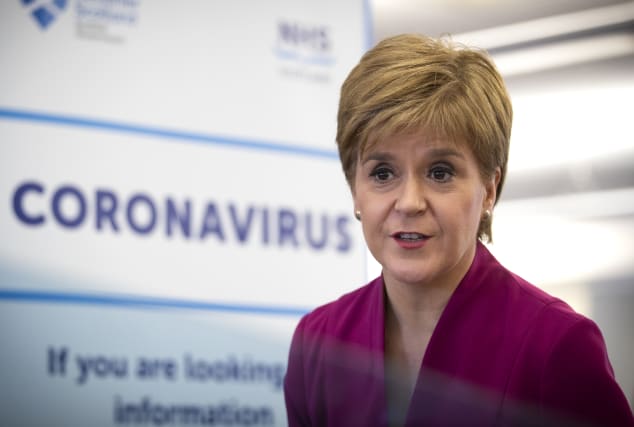 Nicola Sturgeon has said there are no current plans to close schools over coronavirus as the number of cases in Scotland rose to 23.

The First Minister warned that as the UK focuses on moving from containing to delaying the outbreak, people with milder symptoms may be advised to stay at home.

Clear advice will be given by the Scottish Government of any additional measures to be taken by the public, she said, as she advised against panic buying.

Ms Sturgeon told the PA news agency on Monday: “As of 9am this morning, we have confirmed 23 cases of coronavirus, that’s an increase of five since yesterday.

“I would expect to see cases continue to increase in the days ahead.

“It remains the situation though, that in Scotland all our confirmed cases can still be traced to international travel to affected areas or to other confirmed cases rather than to community transmission.”

She said although the UK remains in the containment phase, Government discussions are increasingly focusing on moving to the delay phase to slow down transmission of Covid-19 to relieve pressure on the NHS and protect the more vulnerable.

“It is likely that we move into that phase, at least in a phased way, sooner rather than later,” she said.

“Final decisions about timing about that haven’t been taken yet, they are being driven by the best quality scientific advice because it is important that any measures we introduce to delay the spread of the virus are taken at the right time.

“We don’t want to leave it too late, that is obvious, but doing it too early can also reduce the effectiveness of these measures.”

She said the trigger would include the number of cases and level of community transmission but there is no particular number that would spark the change.

Ms Sturgeon added: “Right now if you have serious flu-like symptoms or respiratory illness your GP, or common sense, would tell you to stay at home and not go to work.

“We will continue to take these decisions in an orderly way and give people as much advance notice as possible.

“The advice we have right now, but this will continue to be under review, is that closing schools or cancelling large-scale events would not have an appreciable impact on slowing down the spread of the virus.”

On panic buying, she said: “It’s often the panic buying that causes the shortages, not any underlying issues.

“My advice and appeal to people would be to apply common sense, behave as rationally as possible and be reassured that Governments will continue to give well thought out advice based on the best scientific evidence that tell people what they have to do.”