Stormont leaders to consider advice on US trip – Foster 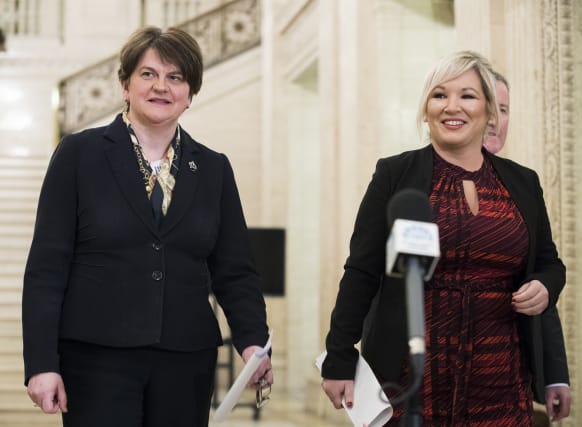 Stormont leaders are to review advice on whether they should go ahead with their St Patrick’s trip to Washington DC amid the coronavirus outbreak.

Having been due to fly across the Atlantic on Sunday, they scaled back their visit and are currently due to fly to the US capital on Wednesday morning for a series of engagements, including the traditional St Patrick’s reception with President Donald Trump in the White House.

On Monday, Taoiseach Leo Varadkar also cancelled plans for the New York leg of his St Patrick’s itinerary, but still intends to travel to Washington at this stage.

After attending the latest Cobra meeting in London on the health crisis, Mrs Foster said she and Ms O’Neill will seek updated advice on whether to fly to Washington.

“I should have been in New York at this moment in time, instead I am in London,” said the DUP leader.

“We will take and look at further advice later on today and even into tomorrow.

“We are not actually due to leave until Wednesday morning, we have some time to decide whether it is the thing to do, to go.”

Mrs Foster told BBC Radio Ulster: “The reason we go is because we have very good access to the leader of the United States of America. Who else could have that access, and indeed with businesses?

“But we have to balance that with the needs here in the UK and Northern Ireland, so we will be looking at that again over the coming hours.”

Mrs Foster said Northern Ireland, like the rest of the UK, remains in the containment phase in responding to the virus.

She said there are no plans to cancel major public gatherings in the region, but acknowledged that could change.

“At the moment we don’t have advice to cancel those but that advice may change in the coming days and weeks; I know it is very uncertain for everyone who is planning an event or indeed attending an event,” she said.

“But in all of these things, the fact that this is a new virus, a new virus which we haven’t dealt with before, a very virulent virus – we just have to take the scientific advice in all of those matters.”