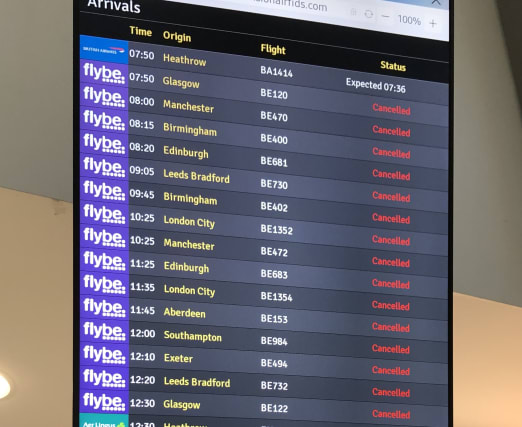 Some baggage handlers and check-in staff at George Best Belfast City Airport face a “temporary lay-off” due to the collapse of Flybe, trade unionists have said.

A 14-day unpaid period has been proposed by Swissport bosses, Unite said.

The regional airline went into administration last week after a bid for more financial support failed.

The union is engaging with lawyers around challenging the legality of the move.

Regional officer George Brash said: “This is a totally unacceptable response by Swissport. This is a hugely successful company which last year reported earnings before tax of more than 200 million euro.

“This is not a company that needs to threaten the income of their employees in the aftermath of the Flybe collapse; indeed, with the prospect that many, if not all, former Flybe routes could be taken on by other airlines this is an unnecessary and unacceptable response rooted in a short-term desire simply to maximise profits.”

The staff are among 150 workers at the airport employed by Swissport.

A Swissport spokesman said: “Flybe’s unfortunate news has come at a very challenging time for the industry.

“As a business, we have a responsibility to carefully consider the impact this has on our company and identify the best outcome for all our employees and partners across the business.

“Consultations with members of the Swissport team at Belfast City Airport are ongoing so we cannot comment further at this time.”

A spokesman for Belfast City Airport said the airport is continuing its negotiations with a number of airlines in an effort to fill the routes vacated by Flybe.

“We understand this is a difficult time for all employees at the airport, but we hope to have positive news in the coming weeks,” he said.

Flybe was responsible for around 80% of the airport’s flights.