Salmond jury told not to be swayed by ‘sympathy or prejudice’ 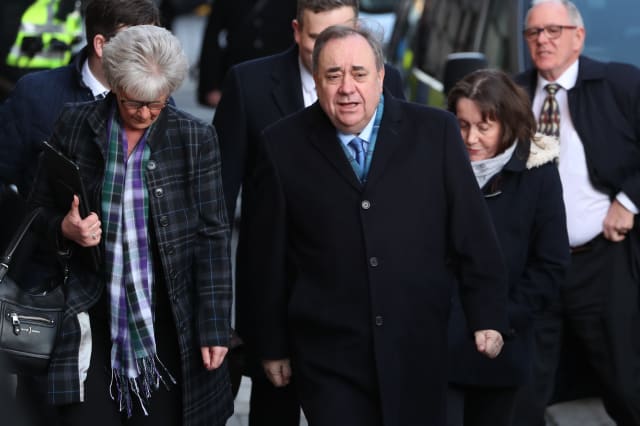 A jury has been told it must not be swayed by “sympathy or prejudice” in the trial of former first minister of Scotland Alex Salmond.

The 65-year-old arrived at the High Court in Edinburgh on Monday for the first day of his trial over accusations of sexual assault, including one of attempted rape.

Judge Lady Dorrian told the jury of nine women and six men they must be “impartial” during the trial.

The judge said the accused is a “very well known figure” and they should decide the case on the evidence heard in court and “nothing else”.

She added: “The overriding requirement that you must satisfy is that of impartiality.

“If you think that there is any reason that you cannot be impartial you must inform the clerk.

“You cannot allow yourselves to be swayed by sympathy or prejudice.”

Salmond faces 14 charges of alleged offences against 10 women, all of which he denies.

His trial is expected to last for four weeks.

The indictment alleges Salmond attempted to rape a woman at the first minister’s official residence, Bute House in Edinburgh, in June 2014.

It is said he placed her legs over his, repeatedly kissed her face and neck, groped her and then blocked her path.