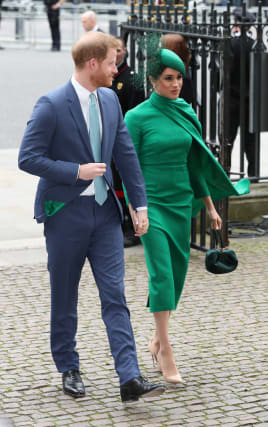 The Duchess of Sussex wore a glamorous green Emilia Wickstead dress with a dramatic asymmetrical cape for her final official royal duty.

The duchess could be seen occasionally flicking the cape off her hand as she walked through Westminster Abbey with the Duke of Sussex to her seat.

Followers of Meghan’s fashion @MeghansMirror said the dress was bespoke Emilia Wickstead, and that the duchess was carrying an emerald green Gabriela Hearst handbag and wearing Birks Snowstorm earrings.

The blogger described her as “a vision in green”, while Meghansfashion.com hailed her as “glamorous”.

She has already worn red, white and a shade of blue – the colours of the union flag, but also those of the US star and stripes flag – on her final round of official engagements.

For her carefully choreographed farewell tour, she chose a fitted turquoise blue T-shirt dress by Victoria Beckham to the Endeavour Fund Awards, and a red Safiyaa dress and cape at a military music festival, and a white organza Topshop blouse and Roland Mouret’s Moka skirt for a private visit to the National Theatre.

She also opted for a cream jacket, white top and black trousers for a visit to a school in Dagenham, London.

The Duchess of Cambridge was in red, wearing a coat by Catherine Walker and a hat by Sally-Ann Provan at the Commonwealth Service.

The Duchess of Cornwall wore a navy silk and lace dress and coat by Bruce Oldfield and a navy feathered hat by Philip Treacy, while the Countess of Wessex was in a white and navy Suzannah dress and navy Jane Taylor hat.