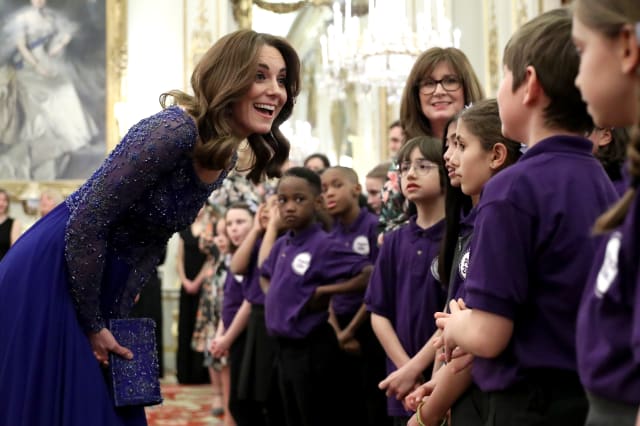 The Duchess of Cambridge praised an original performance by a choir of schoolchildren as she celebrated one of her patronages at a Buckingham Palace gala dinner.

The charity, which became one of the duchess’s first patronages in 2013, aims to provide emotional support to young children and works in 639 schools across the UK.

Earlier on Monday, Kate joined the Duke of Cambridge, the Queen, the Prince of Wales and the Duke and Duchess of Sussex at Westminster Abbey.

The event celebrating the Commonwealth was Harry and Meghan’s last official appearance with members of the royal family before they step back from the monarchy.

Children from choirs at two schools, both supported by Place2Be, joined musicians from the Royal Philharmonic Orchestra to perform an original anthem for the duchess at Buckingham Palace.

Arriving at the event, Kate was greeted by the excited youngsters from New North Academy in Islington and Salusbury Primary School in north-west London.

Wearing a royal blue gown with embellishment detailing by Jenny Packham, which she accessorised with a matching clutch bag and sparkling gold court heels, she thanked the children for preparing a performance for the event.

“You’ve written it especially for tonight? Thank you so much,” she told them.

The duchess later wished two of the schoolchildren a happy birthday, joking that she should be the one singing to them.

She then revealed that Happy Birthday was “one of (Prince) Louis’s favourite songs”, before adding her youngest child was “tucked up in bed” and not at the event.

In a speech following the performance, Kate praised the children for their rendition, adding it was “quite a hard act to follow”.

She told the anniversary event that the charity had taught her that the “simplest things” can make a difference to a child’s wellbeing.

“You taught me, right from the start, that the children in your schools are only as happy and emotionally strong as the adults in their care,” the duchess said.

“That is why you take such great pride in the work you do with your teachers and your parents.

“You taught me the importance of creating safe and nurturing environments within schools, embracing a holistic view of emotional wellbeing which permeates through the whole school system.

“You also taught me that it’s the simplest things that make a difference to children. It’s the quality time that is spent with them. It’s the time you take to listen to them.

“It is trusting relationships that have the most profound impact on the emotional and mental wellbeing of a child.”

Kate told the event there was now a “much greater awareness” of children’s mental health, adding that Place2Be’s services have “never been more needed”.

She said: “I can remember saying after my visit to Willows School in 2013 that I thought every school in this country should have Place2Be.

“Imagine the difference it would make to thousands, if not millions, more children, teachers and parents, if this vision was a reality.”

Founded in 1994 by Dame Benny Refson, the charity has worked with more than 250,000 children and families over the past 25 years.

Kate has been a vocal advocate for children’s mental health since becoming a member of the royal family, as well as for adults’ addiction support and mental health services.

In January, she launched the 5 Big Questions on the Under-Fives survey aimed at starting a national conversation on early childhood.

Ineos plan to build car plant in Wales under threat