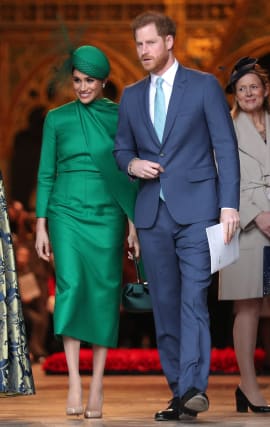 The Duke and Duchess of Sussex hugged and “elbow bumped” well-wishers as they effectively bowed out as working members of the monarchy.

Harry and Meghan’s last official appearance with the Queen, Prince of Wales, Duchess of Cornwall and Duke and Duchess of Cambridge saw them celebrate the family of nations at a Commonwealth Service, where they smiled and waved at the 2,000-strong congregation.

The couple have a few more weeks before they officially step down as senior royals, but as they left the event at Westminster Abbey it was the symbolic end of their life supporting the Queen.

Despite the seismic change in their circumstances the couple laughed and joked with singers Alexandra Burke and Craig David, and world heavyweight boxing champion Anthony Joshua, who had all taken part in the event.

The Abbey has advised all congregations in recent weeks to avoid shaking hands to limit the potential spread of the coronavirus and Harry bumped elbows with Craig David.

But Meghan had no concerns and hugged the singer who had performed his single Unbelievable and also embraced a little girl.

Beneath the smiles, body language expert Judi James told the PA news agency she was aware of some issues: “It wasn’t the warm reunion that we were all hoping for. The tension in Harry’s body language especially was palpable.”

She added: “As Harry walked up the aisle, they both waved at the children, but his face otherwise was quite tense and unsmiling.”

When the royal brothers and their wives met, Meghan was seen to mouth “hi” and give a small wave to William and Kate, followed by a “hello”, as the Cambridges took their seat in the High Altar in the row in front of the Sussexes.

Harry also said “hello” and smiled at his brother.

But Ms James interpreted the encounter as highlighting the past tensions between the siblings: “Harry and Meghan looked a lot more genuinely cheerful, and Harry especially, through a really affectionate smile at Kate.”

“But when it was William, you could see Harry was slightly more rigid and his lips were closed.”

The service brought to a close Harry and Meghan’s whirlwind UK farewell tour, where they attended the Endeavour Fund Awards, a military musical festival at the Royal Albert Hall and Meghan’s secret visit to a school in Dagenham, east London, to celebrate International Women’s Day.

From March 31, the monarch’s grandson and American former actress Meghan will no longer use their HRH styles as they pursue a new life of personal and financial freedom, mostly in North America.

On that date Meghan will bow out of royal life just one year, 10 months and 12 days – or 682 days – after marrying into the family.