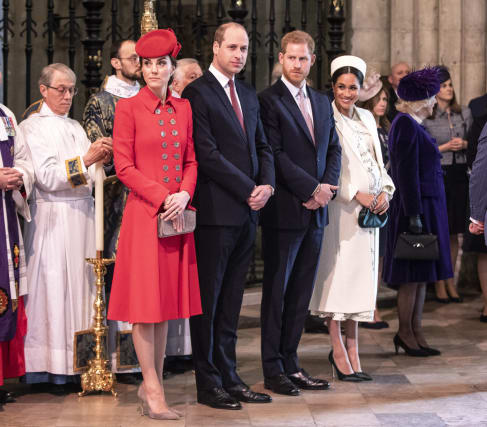 The Duke and Duchess of Sussex will not be part of the Queen's procession through Westminster Abbey at the start of the Commonwealth Service as they make their final official appearance as senior royals.

Harry and Meghan are joining the monarch, the Prince of Wales, the Duchess of Cornwall and the Duke and Duchess of Cambridge in the central London church as they carry out their last public royal duty before they walk away from the monarchy.

But, unlike last year, Harry and Meghan will be conducted to their seats, rather than waiting for the Queen's arrival and walking through the church with the monarch and key royals as they did last year.

The move signifies their impending exit from The Firm – dubbed Megxit.

From March 31, the monarch's grandson and American former actress Meghan will no longer use their HRH styles as they pursue a new life of personal and financial freedom, mostly in North America.

The Sussexes will arrive after the Earl and Countess of Wessex, who will also be escorted to their seats.

The procession will include Charles and Camilla, William and Kate, clergy, Prime Minister Boris Johnson and the Commonwealth Secretary General, among others, according to the Order of Service.

In 2019, Harry and Meghan waited alongside William, Kate, Charles and Camilla for the Queen to arrive, before taking part in The Procession of The Queen.

The ceremony – the Sussexes' final public outing in their UK farewell tour – is a poignant milestone as they prepare to embark on their future away from the royal family.