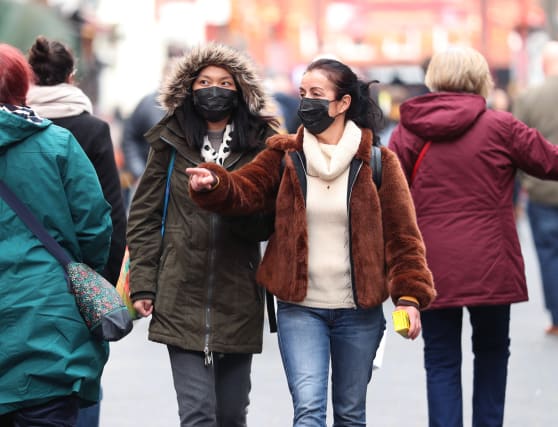 The UK remains in the containment phase of tackling the spread of coronavirus, ministers have said, as the number of cases rose to more than 300.

As of 9am on Monday, 319 people have tested positive for Covid-19, up from 273 at the same point on Sunday, the Department of Health said. Three people in the UK have died.

Public Health England (PHE) will continue to trace close contacts of anybody diagnosed with Covid-19 in the containment phase, advising them to self-isolate at home to delay the spread of the virus.

Moving to the next delay stage would mean that social distancing measures – such as restricting public gatherings and more widespread advice to stay at home – could be brought in.

And deputy chief medical officer Jenny Harries said over the weekend the UK was “teetering on the edge” of sustained transmission.

Speaking on the steps of the Cabinet Office, she said decisions to postpone major public and sporting events would be “led by the scientific advisers”, adding: “We’re still in the containment phase.”

The Government’s scientific advisory group for emergencies (Sage) is expected to meet on Tuesday.

Earlier, Culture Secretary Oliver Dowden said cancelling sports events and shutting museums and galleries due to coronavirus would be “premature”.

– Global stock markets have suffered their biggest falls since the 2008 financial crisis, in a small part due to the coronavirus, as the oil price crashed. Trading was halted on the New York Stock Exchange for 15 minutes after the S&P 500 index fell 7%.

– Disneyland Paris remains open but confirmed its first case among a worker there. Transport for London also confirmed a staff member had tested positive.

– A pupil at the Rugby Free Secondary School in Warwickshire is self-isolating at home after being diagnosed with Covid-19, while the Royal College of Physicians (RCP) postponed its annual conference.

– Three quarters of 402 GPs surveyed by GP online said routine appointments should be suspended in the event of a widespread coronavirus outbreak. One in five think this should happen now.

– Environment Secretary George Eustice is holding talks with retailers on how to support vulnerable groups who may have to self-isolate, amid widespread stockpiling.

– Public Health England (PHE) will roll out enhanced monitoring of flights from all parts of Italy from Wednesday.

– Travel restrictions may be put in place for some people planning to travel to Vietnam after reports that seven Britons on a flight from the UK tested positive. The Foreign and Commonwealth Office (FCO) would not comment on the figures.

On Monday, Rugby Football Union chief executive Bill Sweeney spoke to media in London as he left a Department for Digital, Culture, Media and Sport meeting on next steps covering sport events.

He said there was “no medical rationale” for cancelling matches or playing them behind closed doors as things stood but it was a “moving situation”.

Steve Elworthy, director of special projects at the England and Wales Cricket Board, said things remained “business as usual”.

Asked whether behind-closed-doors sporting events were likely, he said: “At the moment I don’t think so. We’re thinking the season just continues and that is our planning.”

At the weekend, Italy imposed restrictions on around 16 million people for nearly a month in a bid to stop the spread of the disease there.

Italy now has the highest number of confirmed cases outside China at 7,375, and its death toll stands at 366.

France, where more than 1,100 cases have been recorded and 19 people have died, has announced a ban on events of more than 1,000 people.

Meanwhile, the FCO has said it is in contact with around 142 British nationals on board the Grand Princess cruise ship, which is due to start disembarkation of guests at the Port of Oakland on Monday.

The FCO said on Sunday evening it was “working intensively” with US authorities to arrange a flight for UK citizens, who are then likely to be taken into quarantine.

Meanwhile, in Italy, Britons are still able to leave lockdown areas in the north, although anyone wishing to travel there from the UK is advised not to do so unless it is urgent.

Across the whole of Italy, museums and cultural institutions are closed and all sporting fixtures must be played behind closed doors.

Childcare facilities, schools and universities are closed until March 15, while public and social gatherings should be avoided with cinemas, pubs and clubs closed. Restaurants and bars remain open with reduced seating.

A limited number of UK commercial flights, including from easyJet, are still flying to and from northern Italy.

Travellers returning from the lockdown areas in northern Italy are advised to self-isolate if they have returned to the UK in the last 14 days, even if have they have no coronavirus symptoms.