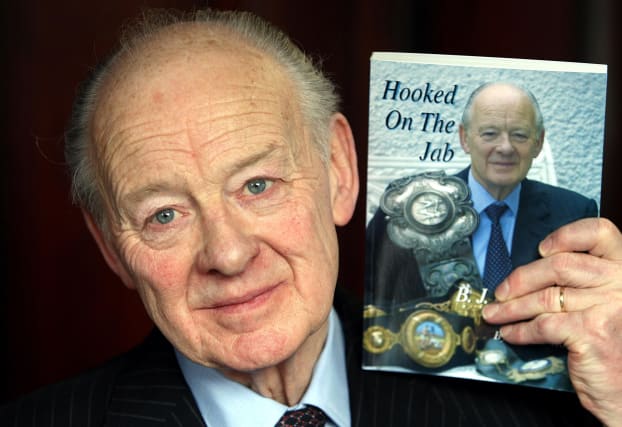 Boxing promoter and bookmaker Barney Eastwood has died at the age of 87.

Eastwood, from Holywood, Co Down, died on Monday at the Ulster Hospital on the outskirts of Belfast after a period of illness.

Known to friends and family as “BJ”, Eastwood made his name in the bookmaking business, building up a large chain of shops across Northern Ireland. In 2008, he sold his 54 shops to Ladbrokes in a deal worth £135 million.

Despite his success in bookmaking, Eastwood was best known for his work as a boxing promoter and manager, particularly his association with world champion fighter Barry McGuigan.

After years of success together, Eastwood’s relationship with the “Clones Cyclone” ultimately soured, culminating in an acrimonious legal dispute.

A spokesman for the family confirmed Eastwood’s death to the PA news agency.

“BJ’s passing has brought great sadness to the family as well as the whole community in Holywood where he was a very visible resident for the past 50 years,” he said.

“All who knew him will miss his remarkable charm.”

He was educated at St Patrick’s College, Armagh, until the age of 15.

The teenage Eastwood was a talented gaelic footballer and won an All-Ireland medal at minor level with Tyrone in 1948 – something his family said he considered his most cherished achievement.

He met his wife, Frances, while working at his brother’s shoe shop in Cookstown, where she was employed as a secretary.

They married, aged 19, and moved to Carrickfergus, Co Antrim, where he bought a public house with his inheritance from his late mother.

Although he started out as a publican, and also worked as an undertaker, he soon turned to the bookmaking trade, opening his first betting shop in the 1950s.

His passion for boxing was ignited after watching organised fights at the US Army Air Force base near Ardboe, Co Tyrone, during the Second World War.

He promoted many boxing shows in the 1960s and, after a break from the sport, returned to the ring in the 1980s as McGuigan’s manager.

His association with McGuigan – whose world title success became of symbol of hope through the darkness of the Northern Ireland Troubles – helped make Eastwood a household name in the region and beyond.

McGuigan’s most famous victory – over WBA world featherweight champion Eusebio Pedroza at Loftus Road in London in June 1985 – was watched by a domestic UK TV audience of more than 19 million.

After the highs came the lows, and the men’s friendship ended amid a high-profile legal battle following McGuigan’s world title defeat to Steve Cruz in Las Vegas in 1986.

Eastwood finally won a long-running libel action against McGuigan in 1992.

During the 1980s and 1990s, Eastwood’s Gym in Belfast was famous in boxing circles around the world.

Eastwood also owned or part-owned many horses and greyhounds throughout his life.

Among some notable successes was winner of the last English Greyhound Derby to be run at the White City, London, in 1980 – Indian Joe.

He was predeceased by his son Fintan, his brothers Thomas, Joseph, John and William, and his sisters Gertrude, Johanna and Elizabeth.

His family said the Eastwood home will remain private ahead of the funeral later in the week at St Colmcille’s Parish Church, Holywood.